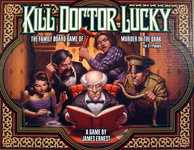 You need to ask yourself just one question - "Are you feeling lucky?" In the game Kill Doctor Lucky, all of the players are trying to be the one to kill the lucky doctor. When I first heard about this game I thought that it sounded kind of crazy and I didn't know how it would really work, but it works very nicely. Just imagine playing a game that is the exact opposite of Clue. Players move about the mansion trying to get in a room alone with the old man to kill him. I know, it is a little morbid, but it is a lot of fun. Players use move cards and room cards to be able to move around in addition to their free space move. Players also have weapon cards to attempt to murder Doctor Lucky and Failure cards to foil the attempts by the other players. I enjoy deductive reasoning games and Clue is definitely a fun game as well, but given the choice between Clue and Doctor Lucky, I would take the Doctor. The game is for 3 to 7 players, but when you get up to 6 or 7 the game seems to drag on a bit more. I also own one of the expansions for the game that includes Doctor Lucky's pet dog. I really like this addition to the game and I think it really adds a lot. It seems a bit ridiculous to me that the wooden dog piece and the little rule booklet costs $8.00 though (just a bit over priced). Great game and that is How Lou Sees It.

A big SHOUT OUT to ME! Tonight's post is my 100th post for How Lou Sees It. It almost feels like some sort of party should be happening right about now. It also means that these A Game A Day blog posts have now accounted for more than half of my total posts. Well, thank you for supporting me in my endeavors and here is to the next 100!
Posted by Lou at 11:30 PM

Email ThisBlogThis!Share to TwitterShare to FacebookShare to Pinterest
Labels: A Game A Day, Board Game, James Ernest, Kill Doctor Lucky, Post 100, SHOUT OUT