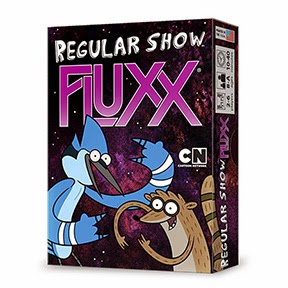 Regular Show Fluxx is one of the newest themed Fluxx decks available from Looney Labs. The general idea behind any of the Fluxx games is very simple. Fluxx is a hand managment game that is constantly changing. Not only are your cards changing, but players are changing the rules and even the goal of the game constantly. A very fun concept. It keeps the game very variable and interesting. The game is not complicated even with all this change.

The base rules and idea of the game (again, these can be changed or modified throughout the game) is that you draw a card and play a card each turn. The goal cards can be played to the center of the table one on top of the other - with the one on top being the current goal of the game. If a player meets that goal, they win the game. Usually the goal cards just list what cards a player must have played in front of them in order to win. Players have Keeper cards which are cards necessary for certain goal cards and Creeper cards which usually inhibit you from winning until you get rid of it (or it may be required from a goal). Action cards allow players to add more chaos to the ever changing game. You may be drawing 4 cards at the start of your turn but you may have a rule that limits you to only 2 cards at the end of your turn.

A very intriguing concept for a game and one that can be very fun. It can get long at times, but hopefully you are in no rush and you are just enjoying the game. The game isn't really what I would call a strategic game by any means, and there is quite a bit of luck involved. A player may start with the required goal and necessary cards to complete that goal and win the game very shortly after starting, or you may change the game back and forth so frequently that it takes you an hour to finish the game. Very interesting. I'm personally not a huge Regular Show fan, but it seems like they have themed the game well (see video review below). Check out the game and game play. Looney Labs has many different themed decks including Monty Python, Zombie, Pirate, Star, and Oz to name a few. If this isn't the right theme for you, check out their other themed decks. There is even a Holiday themed deck coming out soon that I think will be a very fun theme (perhaps a review of that one forthcoming). Life is too short to remain constant all the time, so every once and a while you just need to change things up - a lot - and you can do it with Fluxx and that is How Lou Sees It!

The following is an update from MAGE Company on upcoming games, Kickstarter projects, and Essen information. If you have any additional questions concerning any of this information, please visit the links provided or contact MAGE Company. Another review coming soon! I hope to get more reviews done and posted soon as I am way behind at the moment. Yikes!

The 3rd World War was referred, by many, as the last war because of the vastness of destruction that it had caused. Everywhere around the world, mankind suffered great casualties and horror — but a few survivors that had the power and the resources built mighty cities all around the world to gain strength and rule again. The cities that were built each had a unique aspect: They contained golden metallic walls, symbolizing hope. Thus, they were named the Golden Cities. This game takes place five years after the Last War, with the players taking on the role of people vying for citizenship within a Golden City.

You can vote the box and the Minis on Board Game Geek just by checking the gallery of the game. Check it here

In each turn, the players can spend action points to do several actions such as moving through the city, raiding buildings, attacking other players, and more. Each player has a specific skill — mechanic, trader, electrician, bodyguard and medic — and has his own unique items to build; those items can be traded off against other items or resources.

The board of the game is modular so that in every game you have a new map to discover. All over the map, the players find different buildings which they can raid. Each time a player raids a building, a raid card of this type of building is taken and read, which leads to specific circumstances taking place. The player will be made to make various decisions including important moral decisions! Upon resolving the various decisions, you will receive character points. The choices you make, for good or for bad, will lead to specific perks and advantages (or disadvantages) during the progress of the game. When raiding a building, you get resources (tools, scraps, mechanics, electronics, etc.). By combining these resources, you can craft items with special abilities. By doing so, you will advance your skill points.

Every player also gets secret quests of the golden city. To fulfill these quests, the players have to spend the resources mentioned on the card. To fulfill a quest will not only lead the players closer to victory but also give them advantages for the rest of the game. We will demo the game at Essen Spiel, on October at our booth Hall 3 - Booth O103 while we have scheduled the campaign for the Kickstarter on November 3.

Currently we launched a new campaign on Kickstarter for a new game called "The Orcfather" a fantasy-themed card game for 2-10 players with basic price at $30 including ship fees for several countries. Check it here: https://www.kickstarter.com/projects/magecompany/the-orcfather 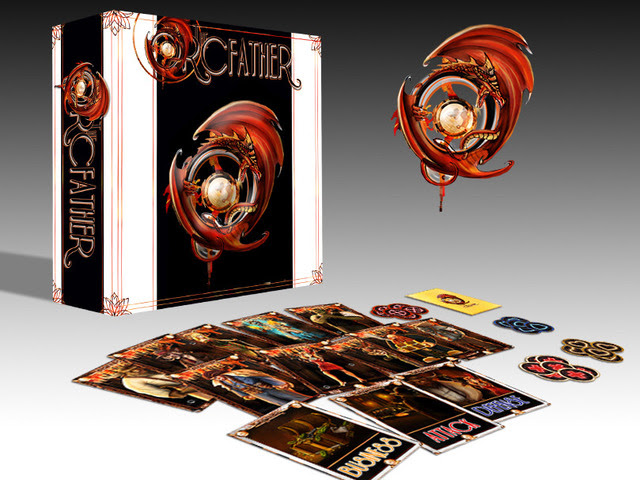 We will be at Essen Spiel at Hall 3 - Booth 3-O103 along with the team who will demo our games. Here is the diagram of our booth where you can find us:

At this Spiel we will also carry 12 Realms. Any issues from the first printing run has been addressed and the reprint of the game is better than ever with upgraded quality, revised rules, glued minis and more. The game will have a special price at 35 EU but also there will be packs that include small expansion for the basic game.

We will also demo some of the Plots of the 12 Realms: Ancestors Legacy. Since we still develop the game, we made sure to create a couple prototypes in order to demo the new adventures among the realms!

Four exciting new realms lie hidden in the Fairy World and you must prepare yourself to explore them so as to defeat all of their enemies. Kievan Empire, Golden Caliphate, Olympia, and Nile Valley are the new lands you will get to explore to learn their secrets. Ruslan, Sinbad, along with the rest of the heroes, will unite to fight against Marid, Sobek, and the rest of the Dark Lords!

Ancestors Legacy provides a much different game through its plots. There are now three different plots for both editions, which include a background story and significantly increase the difficulty level and excitement of the game – increasing the amount of decisions that players will have to make. A plot may have you playing with six realms (combining old and new lands), facing all of the Dark Lords, or creating a really fast game with a unique set-up. Now, more than ever, team camaraderie will be necessary in order to reach victory!

Our new game Höyük will be also available since we finished the production and the game is on the way. The price for the game will be at 35 EU. This version is trlingual: EN-FR-GE

Imagine yourself some 10,000 years ago in the Middle East.

Your clan has left the ancient nomadic life and settled with four other clans in the valley. The community has repeatedly succeeded in harvesting crops, and some families are getting better at raising animals; next moon will see the birth of a new generation of pups. We all praise our own gods and Mother Goddess for being good to us. This new era has brought something new to us: The area is progressively filling with dwellings, built tight against each other. New generations are building their houses over the remains of old constructions. Our greatest families have now constructions way up over the land, proudly showing off their shrines and wealth to the community. Who knows, when the children of our children will come to the world, which clan will rule this multitude?

In Höyük, each player represents a clan that settles with other clans to erect a village. During the game, a replica of a Neolithic settlement will be built on the Höyük board using tiles that represent houses. Many additional pieces — such as ovens, shrines, and pens — will also aid a player in building his settlements. ("Höyük" is Turkish for hill or mound. The word is also used for prehistoric settlements in the region that have a characteristic, hill-like look from houses being built on top of older houses and the absence of streets between the houses because people entered their homes through the roof.) The goal of the game is to build the best settlement and score the most victory points, with multiple paths to victory and many choices along the way. The best clan will prevail in Höyük!
--
MAGE Company LTD
www.magecompany.com 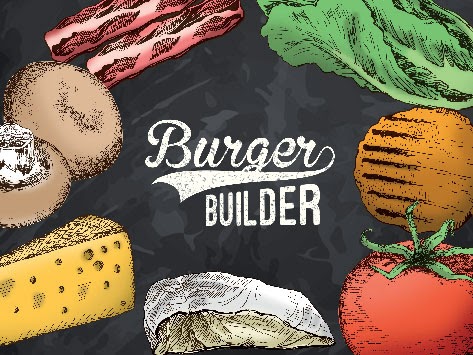 Burger Builder is a little hand resource management game where you collect ingredients and build burgers. I really like the artwork on the cards and the general mechanics of the game are good. The game is light and very easy to learn/teach. I struggled with the length of the game - seemed a little long for the light game that it is. It has potential, but it didn't really fully resonate with me and that is How Lou Sees It. (See the video review and some pictures below.) 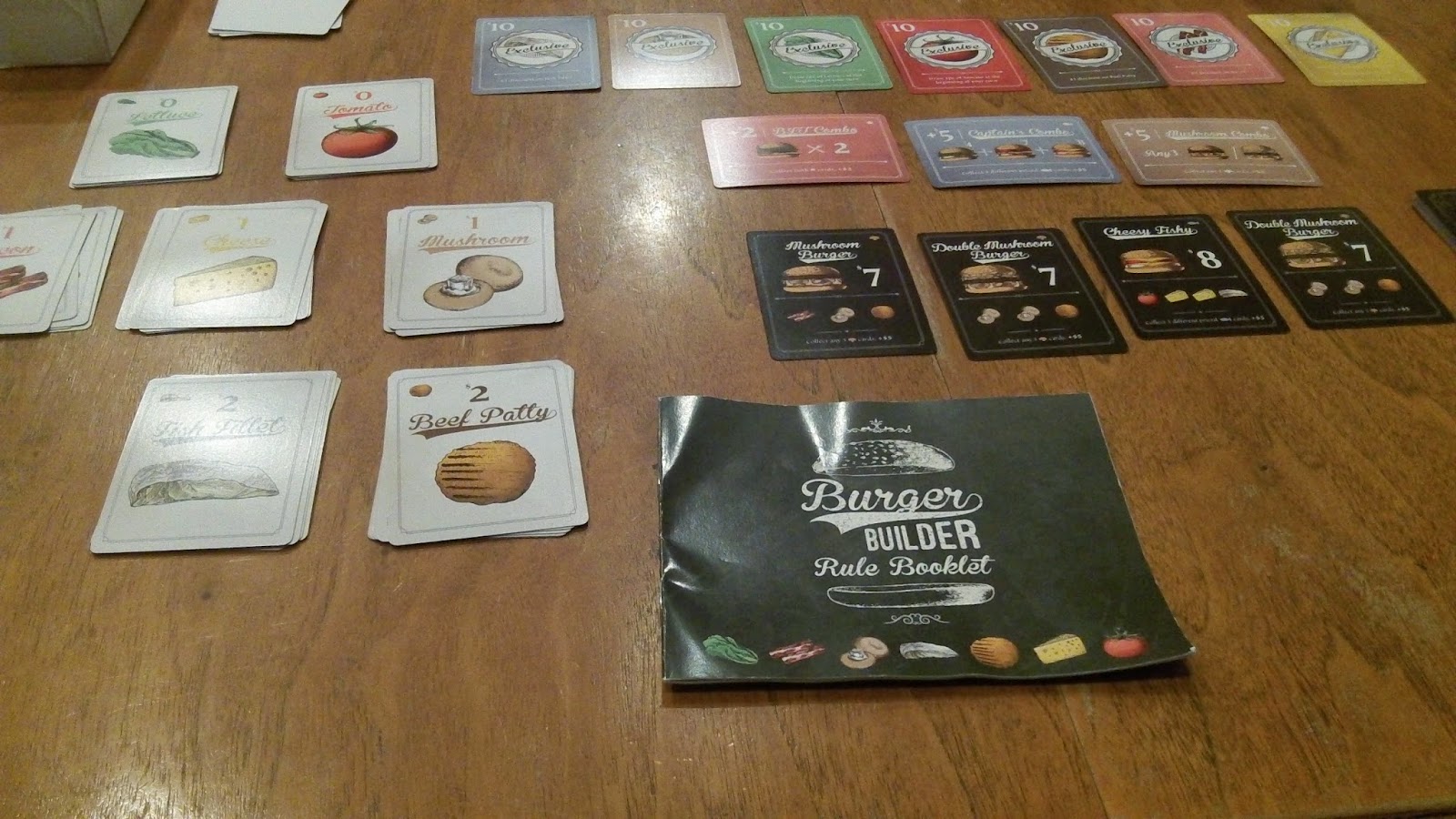 Game setup and ready to go. 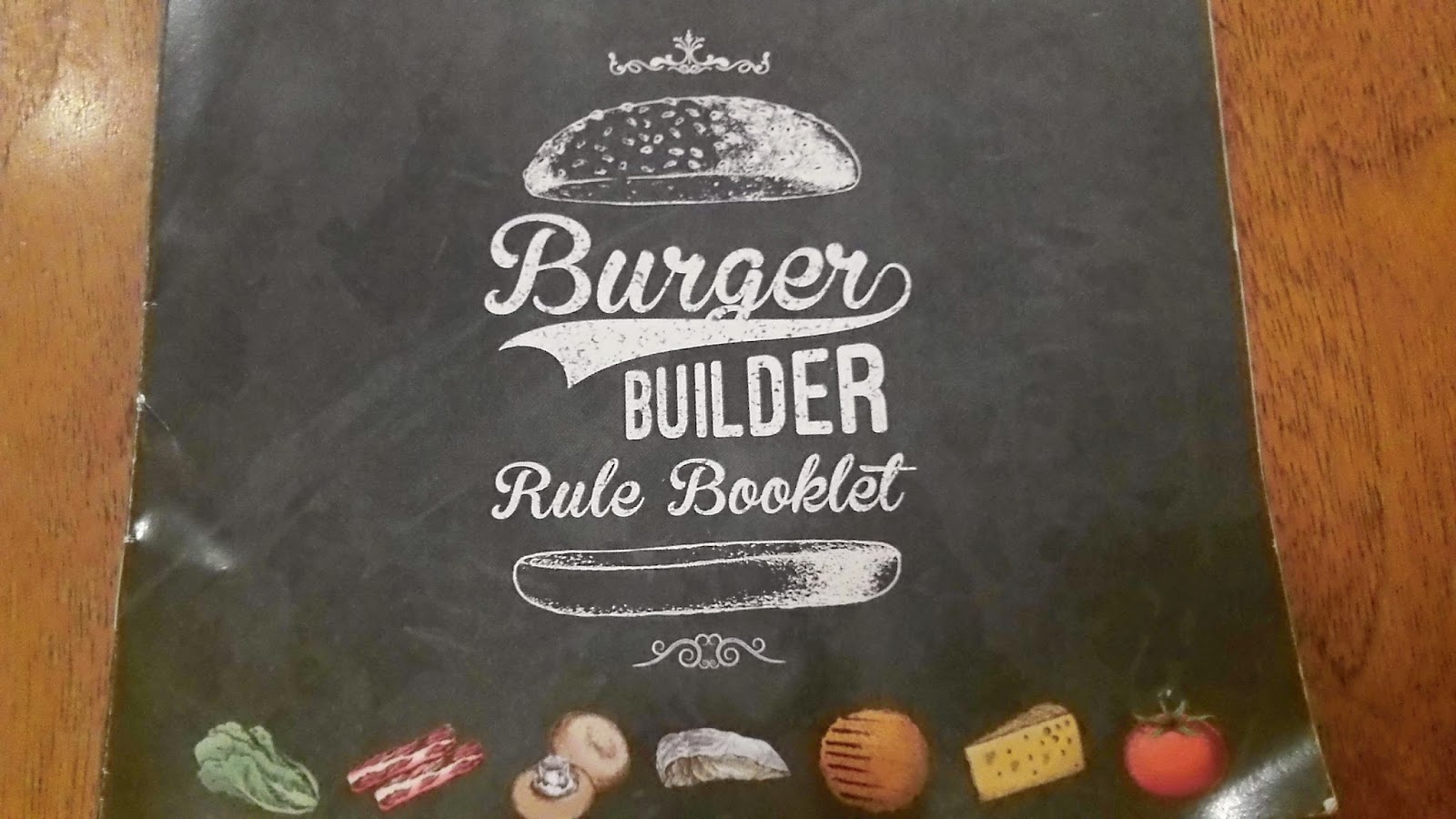 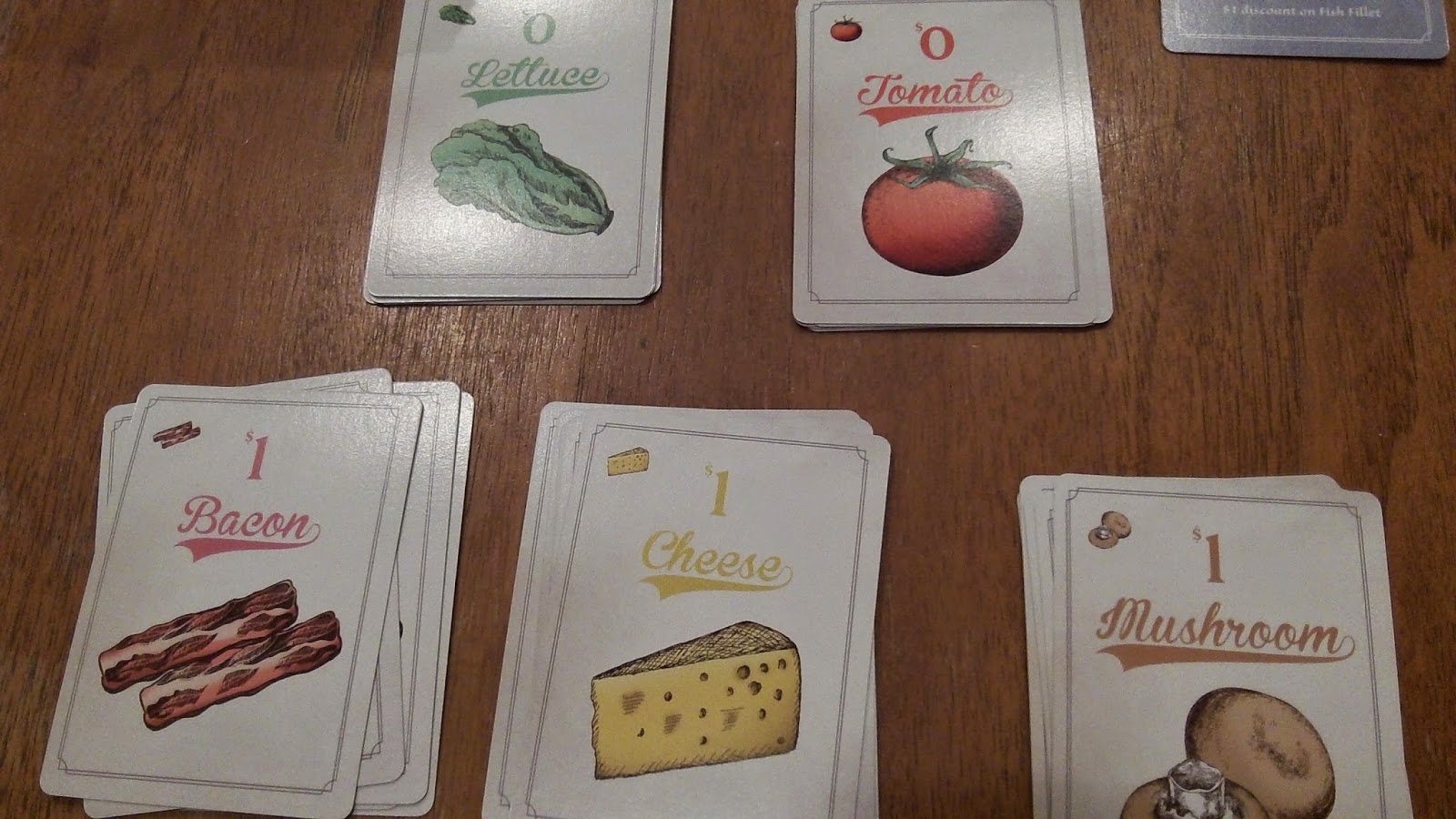 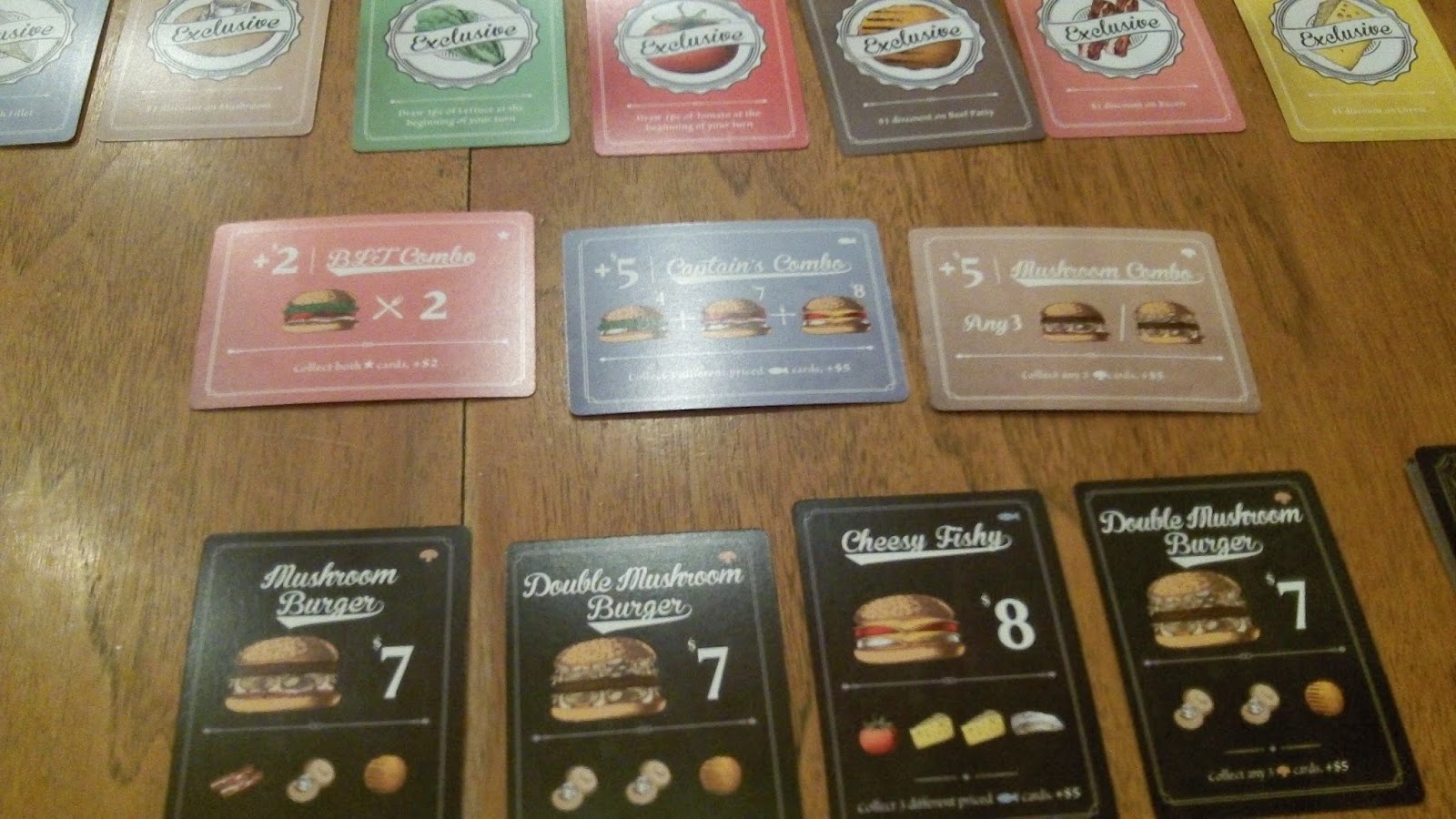 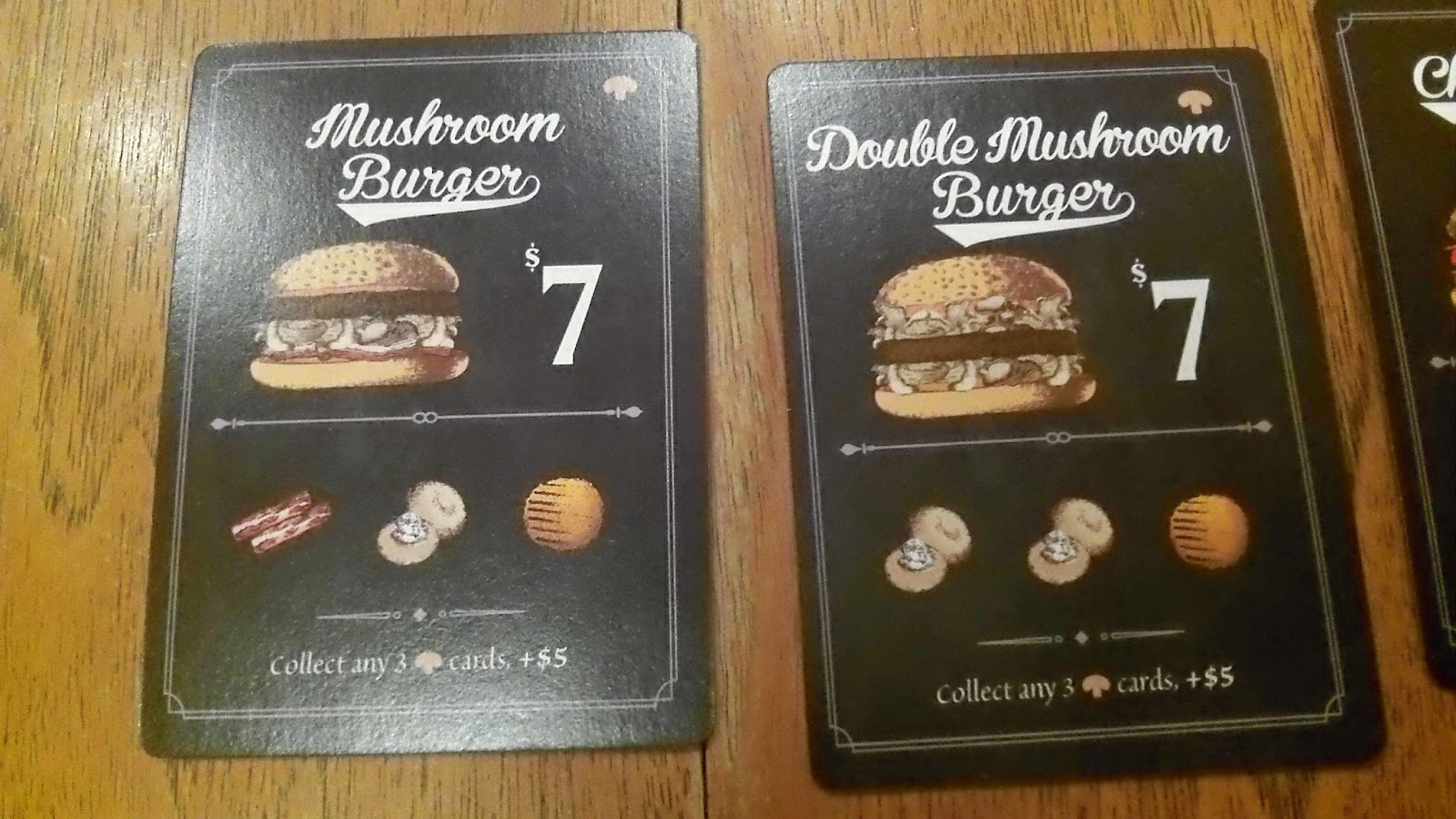 Not a huge fan of mushrooms, but the artwork on the card looks fantastic!

Warband: Against the Darkness (Preview) 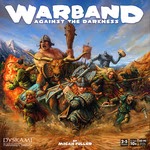 Warband provides variety, balance, and many different ways to victory. This is a preview with prototype components that was provided to me from Dyskami. This game is currently on Kickstarter as of today (9/1/14) there are 13 days days remaining. Players pick 1 of 10 different races each with a special ability that help provide different strategies and help with replayability. Players choose how to advance or improve their race according to the 4 different actions available to the players. Tax, train, scout, and fight your way to victory. Great artwork (I wish there was more). Small cards (not my favorite). Seems well balanced and provides lots to think about without being too heavy to bog you down. Check it out and that is How Lou Sees It! (See video review below with some pictures after that - enjoy!) 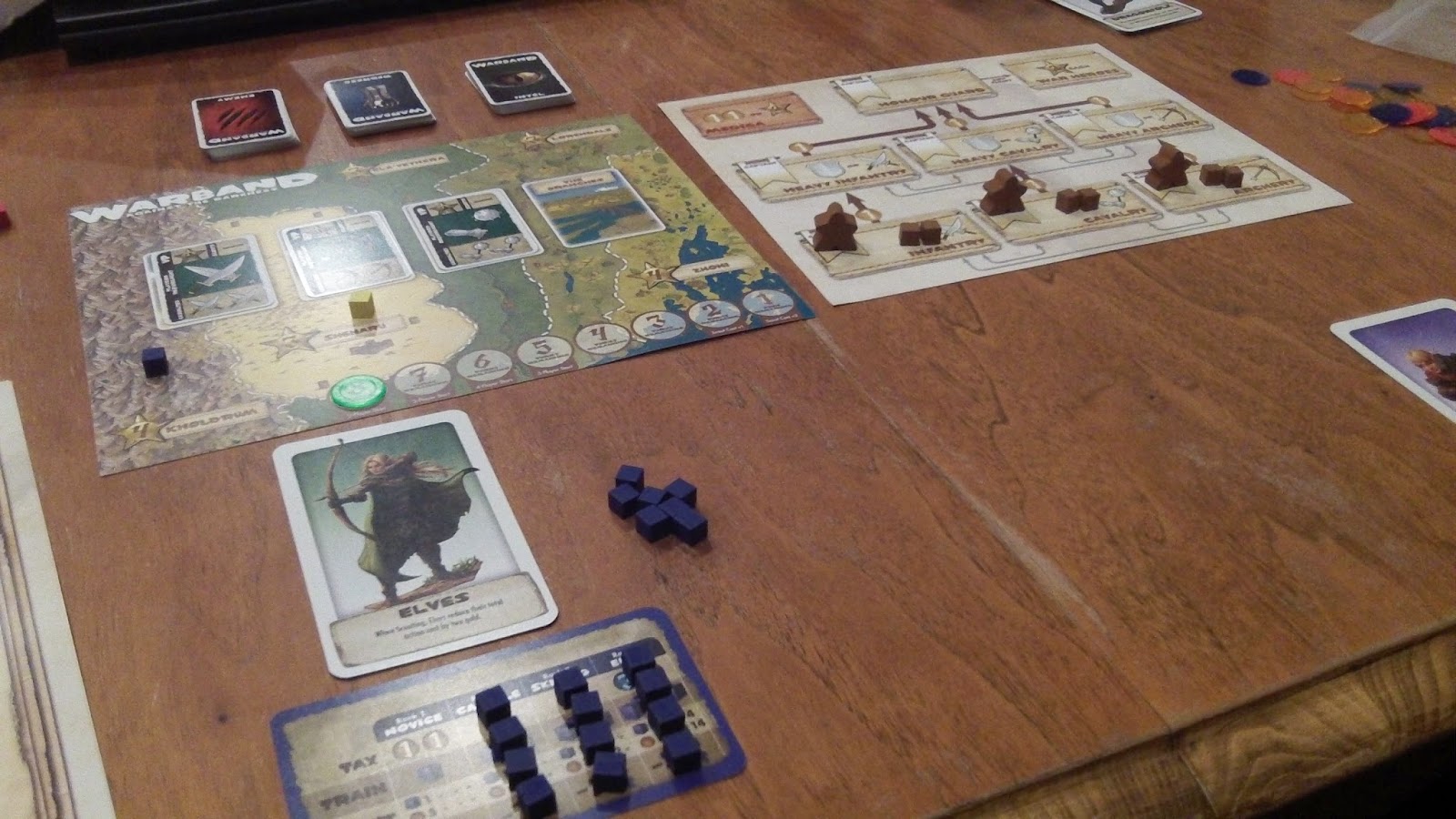 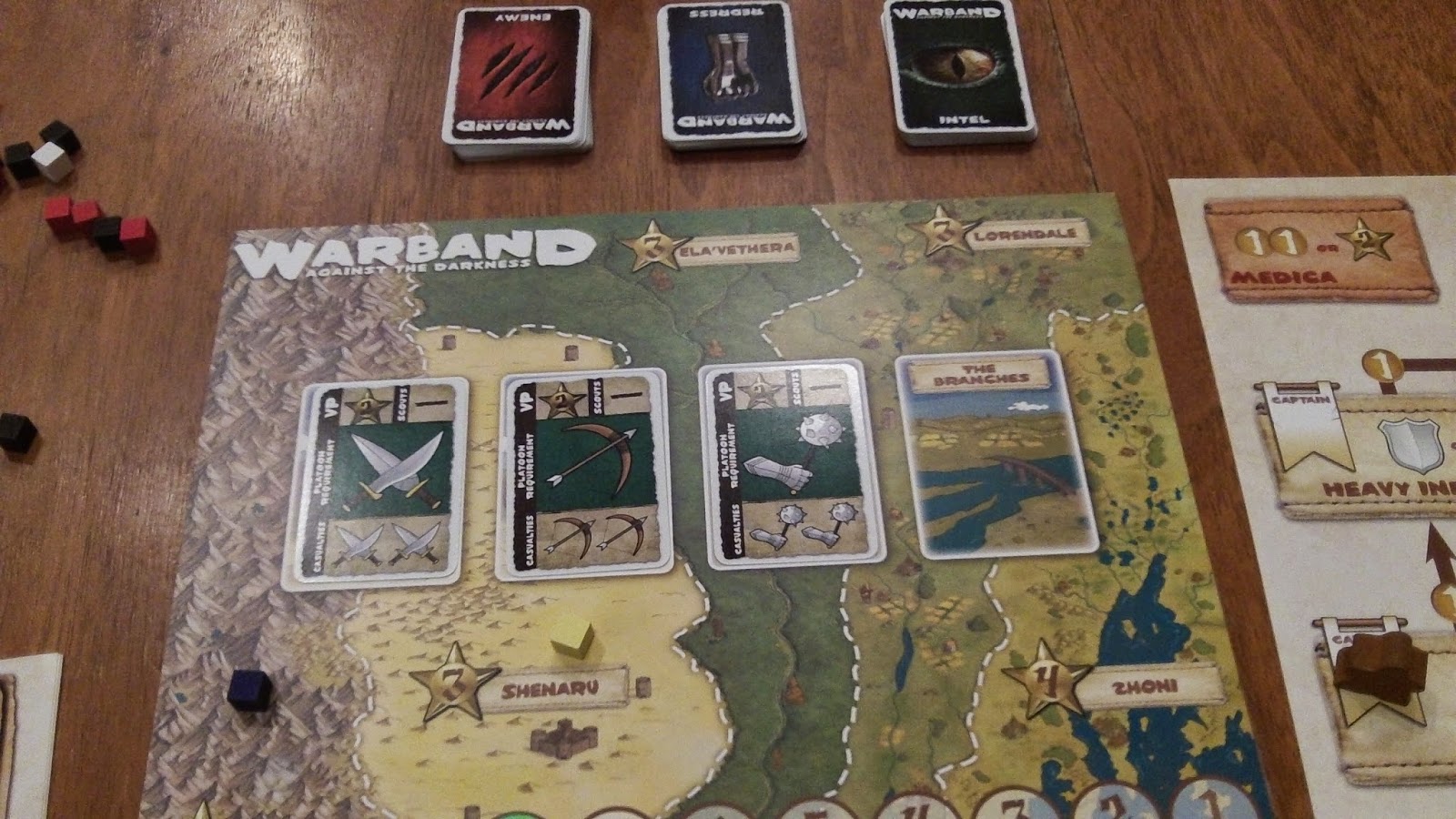 2 Player Setup Close Up on Realm Board 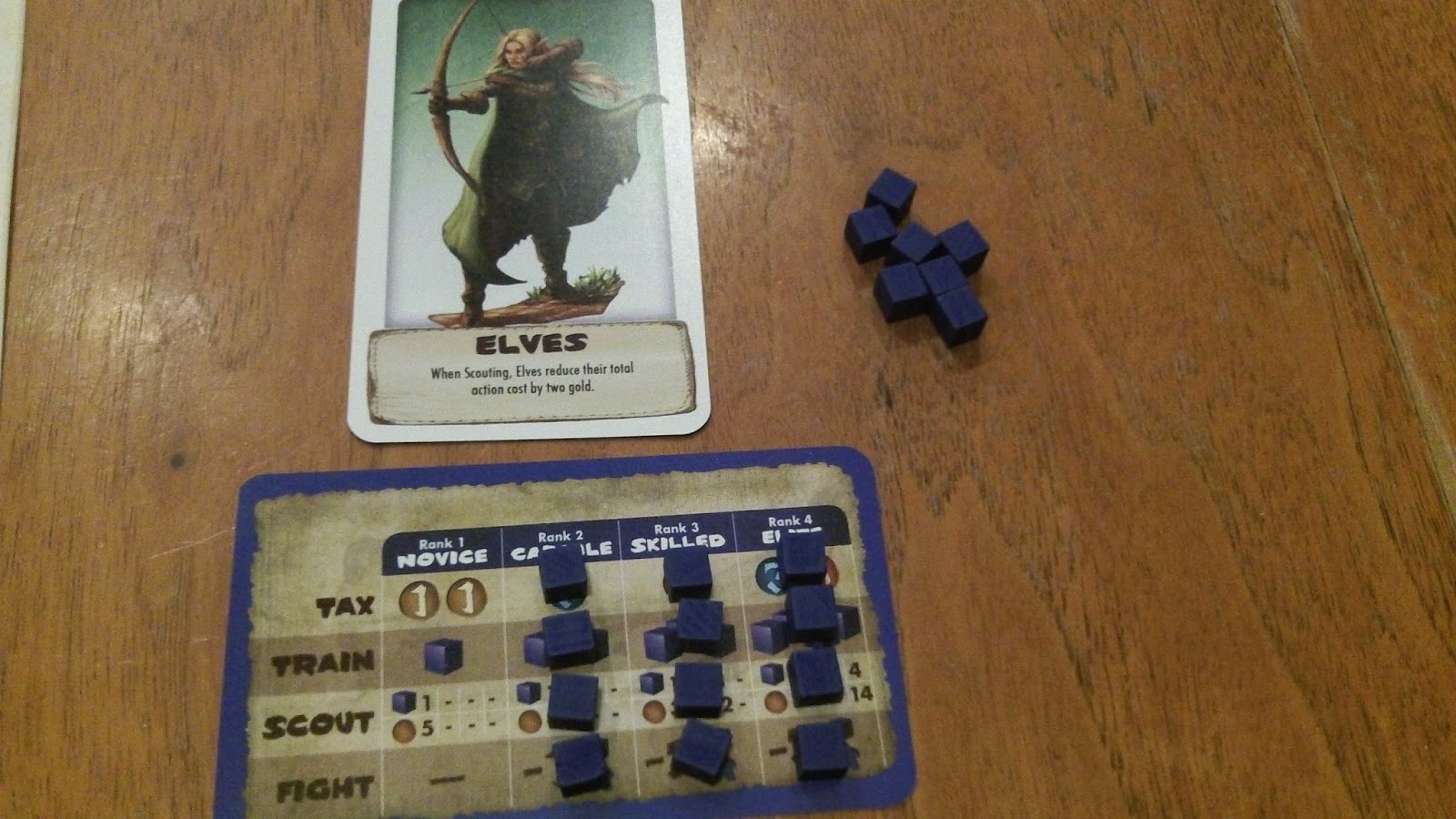 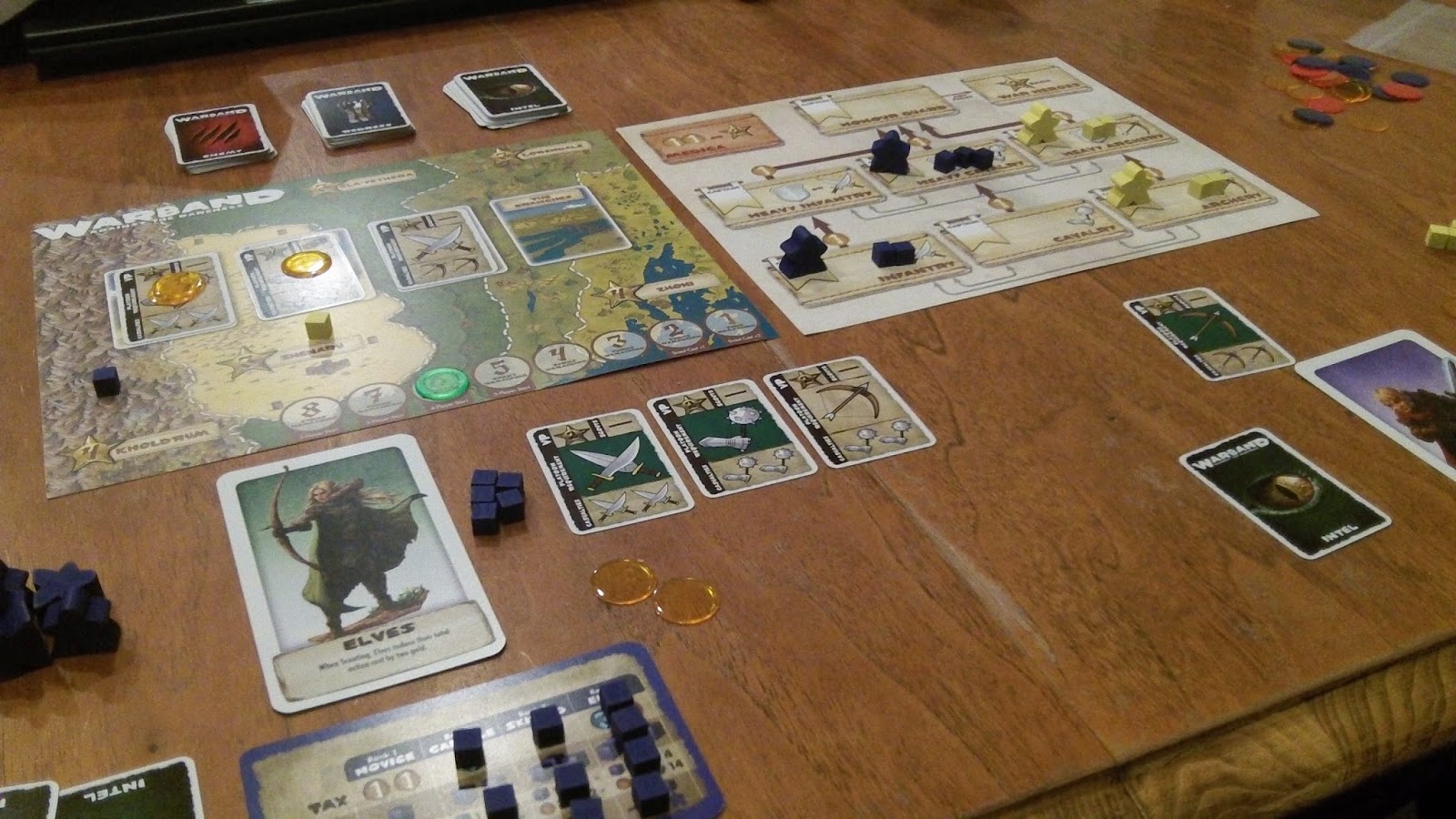 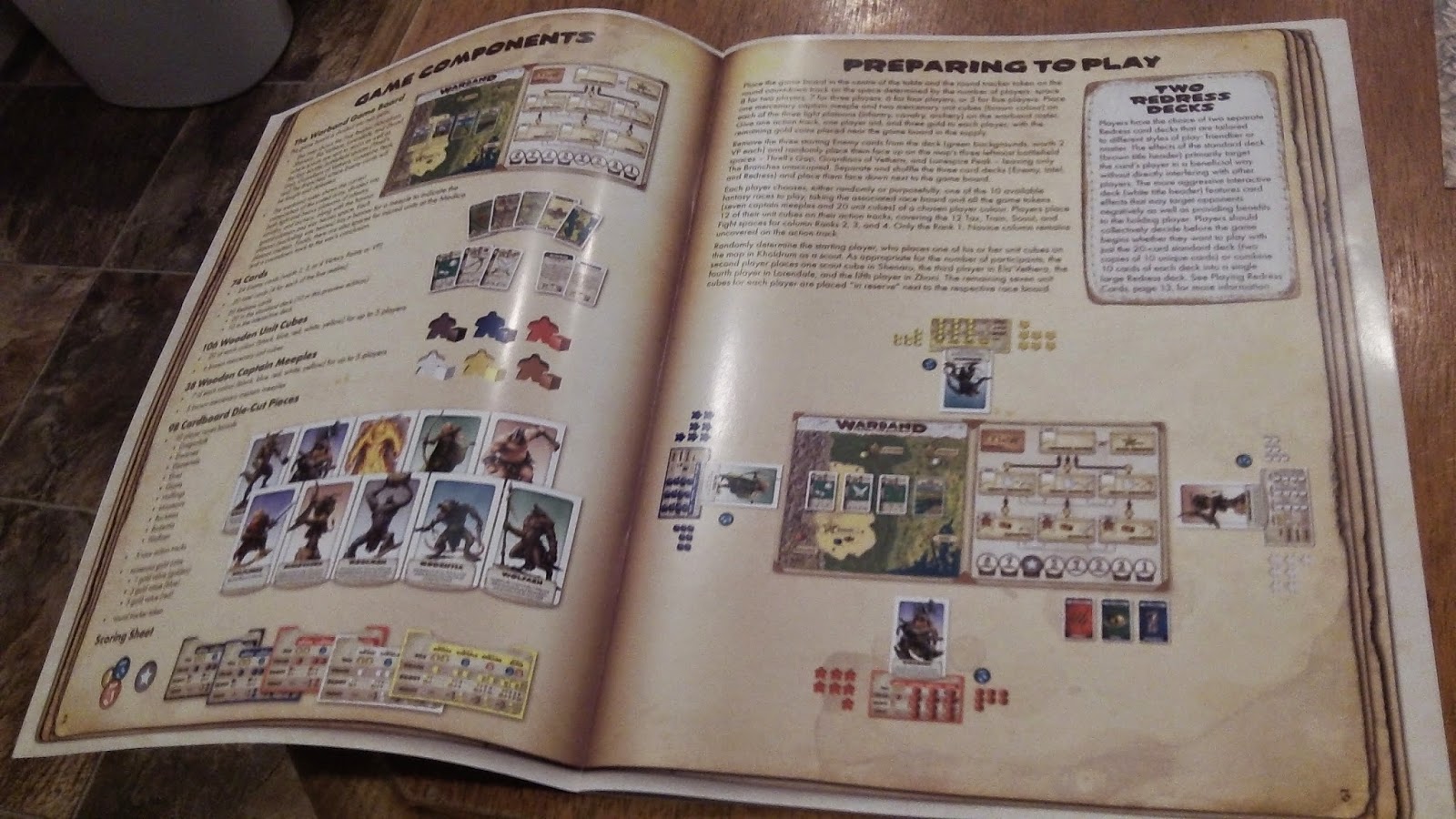 Rulebook
Posted by Lou at 10:48 PM No comments: