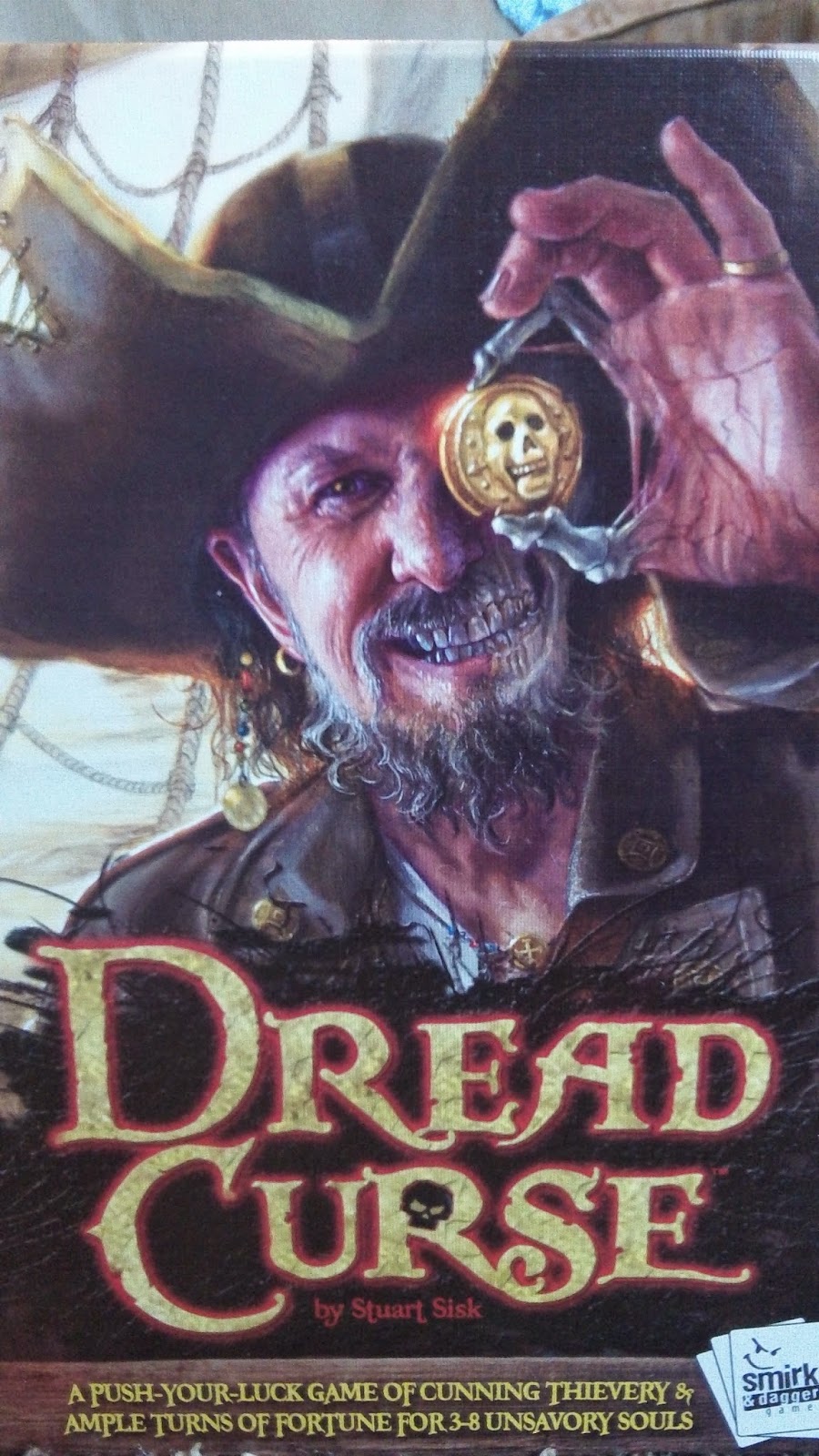 Introduction/Background
When I think Pirates, I think Johnny Depp, Treasure Island, Blackbeard's Ghost, Treasure Maps, Treasure, Parrots, monkeys, Black Spot, and Arrgh, talking funny - just to name a few. Dread Curse is a great bluffing, push your luck, round role picking game and it is something I now think about when  think Pirates.

Components and Rule Book
Very nice quality components from the box to cards to tokens. Nice vinyl type of finish. All the components are top notch. I only wish the coins could have been made of metal, but considering the price point, the tokens representing coins are a nice thick cardboard that seem to hold up well.

The rules are pretty simple and the rulebook does a good job. I was a little confused at first about how the monkey worked with past coins and why that element was there and a few minor things here and there that definitely took a play through to understand.

Game Play
The game play is really simple at heart. While some of this varies depending on the role you have, the idea is that you draw draw a new coin from the center and you will also steal coins from others. Almost all the coins are good, but there are also some nasty cursed coins (2 black spots and a lead slug) to be very scared of. If you end the game with a black spot, you lose. If you have a lead slug, it will be very challenging to overcome the negative points. 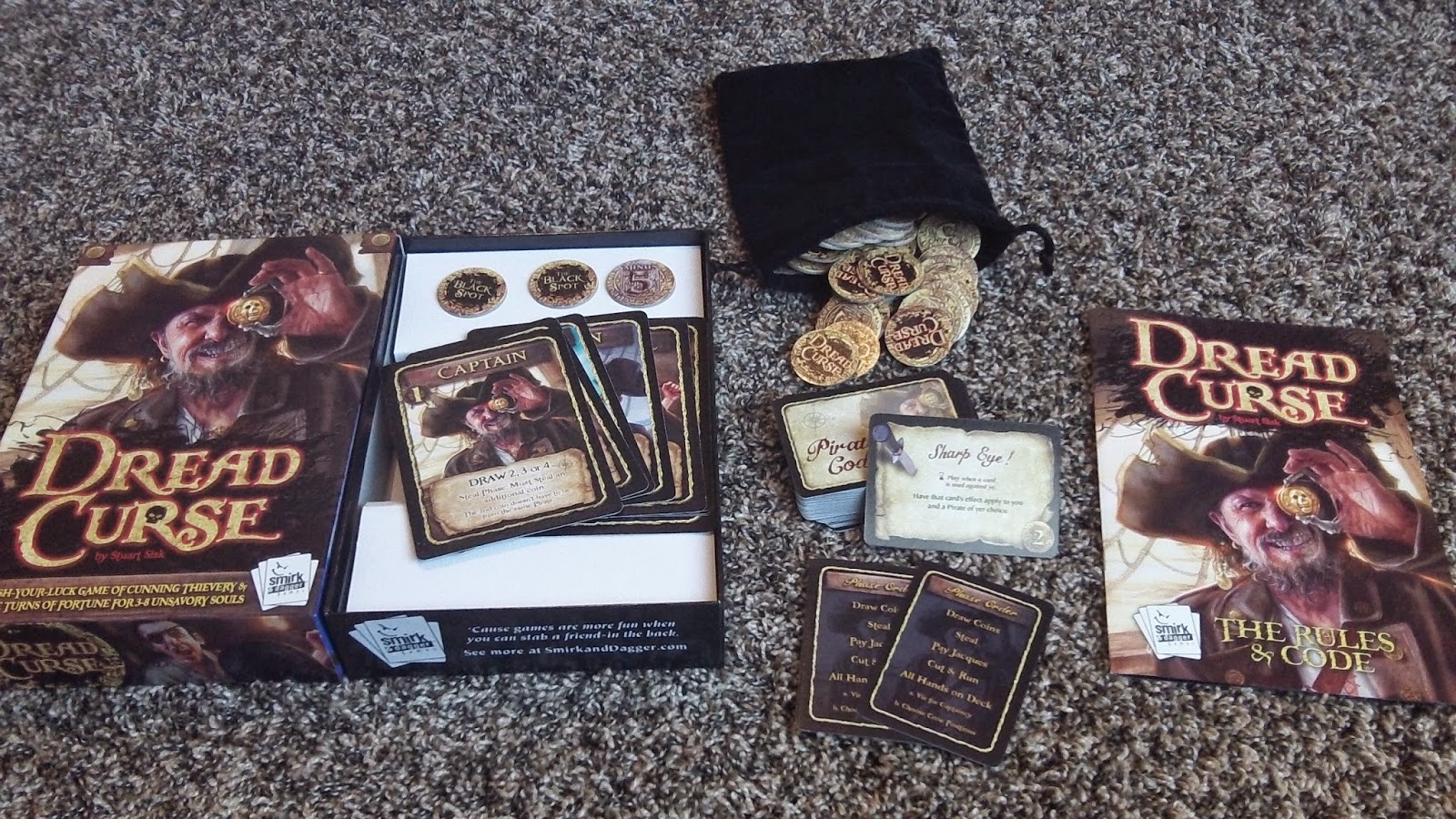 I like how the game begins. One black spot is pulled out with other coins one for each player and these are shuffled and dealt. The player who starts with the black spot starts the game as the Captain. This starting mechanism helps the game along so that it is exciting right from the start and to me just makes sense thematically. 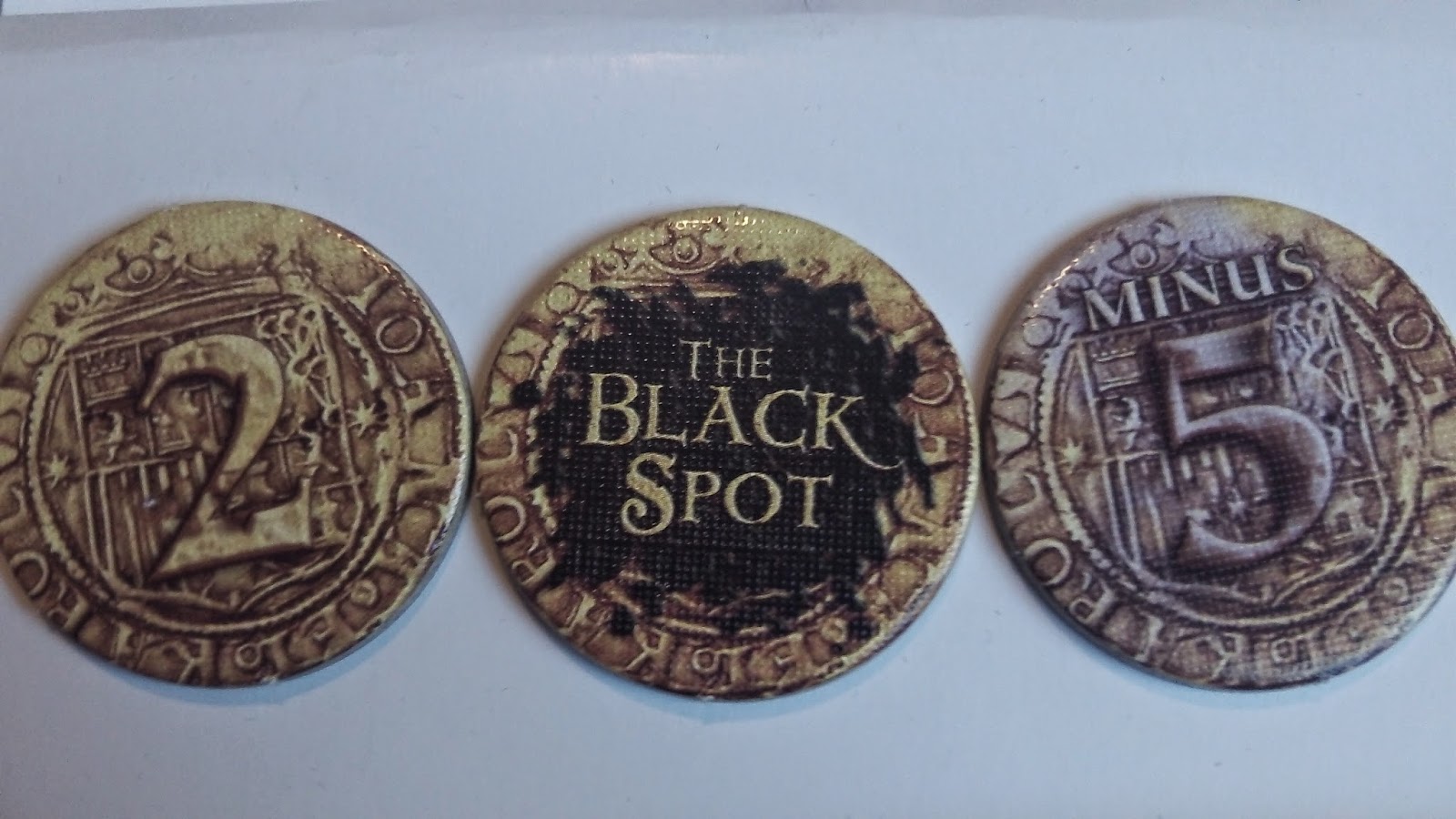 The different roles available throughout the game are all pretty cool. Some roles are definitely desired over others during different times during the course of the game. This sets us up for another interesting part of the game. Once each round of hoarding and stealing treasure is complete, and each player chooses if they want to pay the monkey for a Pirate's Code card, the players then have the choice to either stay in the game or cut and run with what they have. Those who decide to stay will then use the coins they have acquired thus far to bid for the captaincy. The higher players bid, the more likely they are going to be the Captain or snag a more beneficial role that they need. 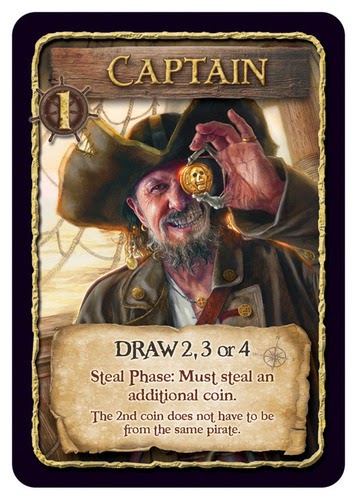 Some of the special "cheats" from the different roles include the coveted "Cook" who can exchange a token from their stash with one in the bag - perfect for getting rid of that pesky Black Spot. The Captain is all about taking treasure as he can draw up to 4 coins and he must steal 2 coins instead of the normal 1. So, as I mentioned, some cards are better than others at different points in the game. The Captain is great at the beginning to acquire lots of treasure quickly, but later on, you run the risk of taking a Black Spot.

I like how the game flows and all the mechanics work pretty well. The Pirate's Code cards really add to the "Take That" element of the game. Sure, the whole game you are stealing coins from one another, but some of these cards can get really mean. They can have game changing effects if utilized at the right time and can definitely swing the game. 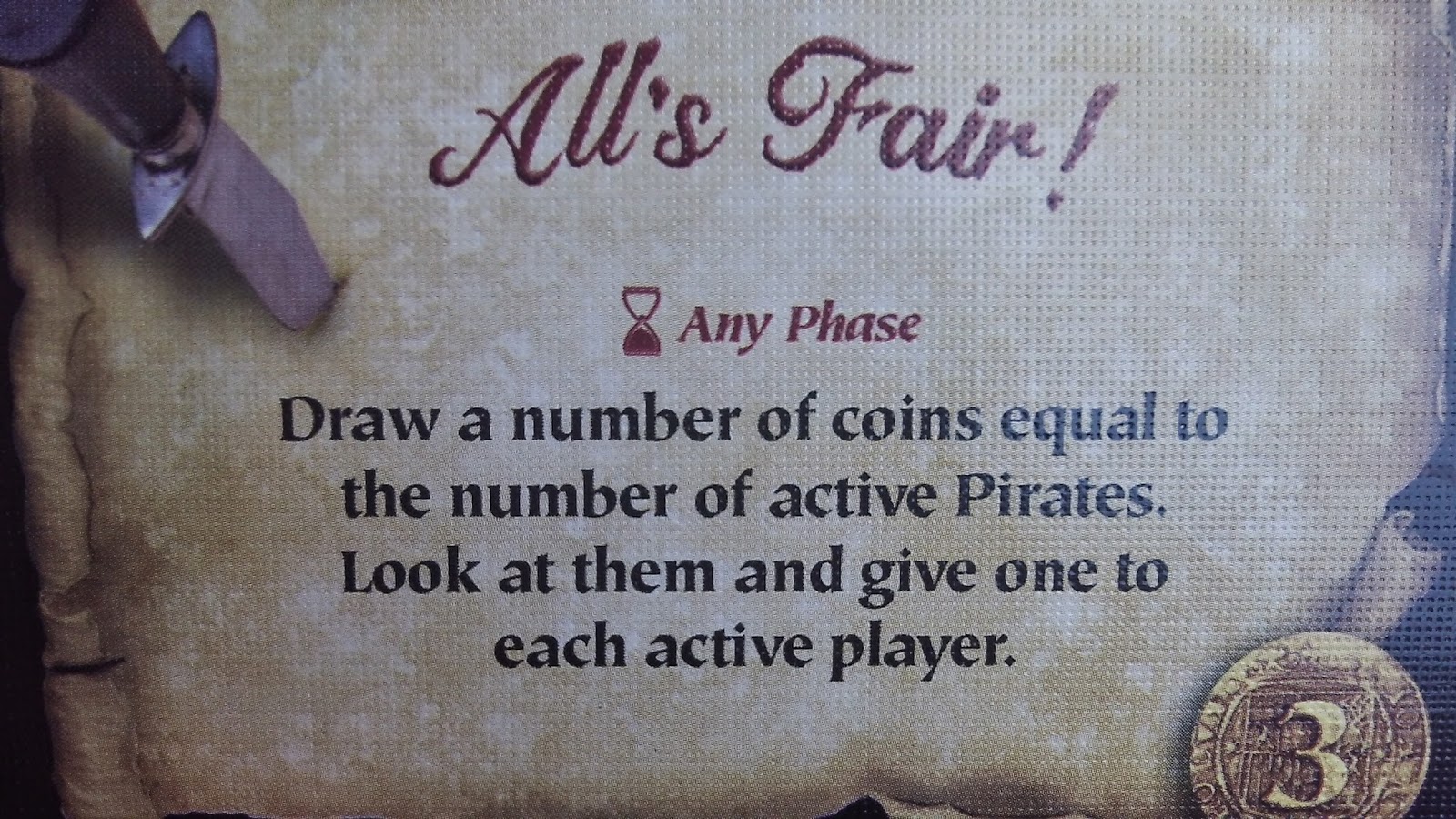 Final Thoughts
My entire gaming group really had a good time with this game. You have the role selection element with bidding which is pretty interesting and is reminiscent of another game I enjoy, Citadels. It has a Take That element that you also have with Citadels or with games like Munchkin or Killer Bunnies. The Pirate theme fits really well and the quality of the components is fantastic. If you are playing with lots of people, players will most likely have some down time as they choose to play it safe and leave with their winnings. Depending on the game, those people could be waiting a while. The game provides a really fun time for a small group (probably best with 5 or 6). I would highly recommend this game to those who like Citadels, Munchkin, Killer Bunnies, Incan Gold, and Pirates. Those who don't really like those sort of games or the Take That attitude that this game has, may want to steer clear. I give Dread Curse 2 Fingers Up or 7 out 10 Stars and that is just How Lou Sees It!