Paris, January 26, 2017 - Asmodee Digital, an international publisher and distributor of digital games, today announced the release of Potion Explosion for mobile devices on Google Play and the App Store. Developed by Studio Clangore and created by Horrible Games, Potion Explosion refreshes the traditional tile-matching game mechanic by adding unique strategic and inventory management elements in a whimsical atmosphere. Players are tasked with creating magic potions, whose abilities can be used during play to provide special techniques for completing additional potions. The player who assembles the most valuable potions and combinations wins.

Enter Professor Albedus Humblescore’s classroom and compete against other potion making apprentices to become an honor student of the Horribilorum Sorcery Academy by developing your inner wizard skills. Learn how to master the art of making complex and valuable potions using spellbinding ingredients such as unicorn tears, dragon smoke, ogre mucus and fairy dandruff. Manage your laboratory apparatus and apply the right dosage to your test tubes and flasks to design the ultimate potions whose abilities will help you grow into a master potions student. Gather your resources in the dispenser, and compete with ingenuity to collide ingredient marbles of the same color to trigger explosions! The more identical marbles collide, the more ingredients are collected through chain reactions to cook up your magic potions. Combine the correct ingredients to create stunning potions such as the Elixir of Blind Love, the Potion of Prismatic Joy, or the Sands of Time. You can also drink potions and benefit from their magical effects to collect more ingredients, or steal directly from a rival’s pool.

Powered by Asmodee Digital technology, offering both a single and multiplayer mode (local and online for up to 4 players), Potion Explosion delivers an original and captivating symbol recognition play experience in a fantasy world environment. Players must use their talent to win skill tokens by mastering a particular potion several times or by proving their skills at preparing a variety of potions. Garner the most skill tokens to win the game and become a Potion Master! Follow the tutorial to learn the secrets of potions and revise your exam before you begin your careful blend of mixtures. Don’t panic if you’re new to wizardry, once in the classroom, players can ask for a little help from Professor Humblescore.

Potion Explosion is available now on the App Store and Google Play store for $4.99 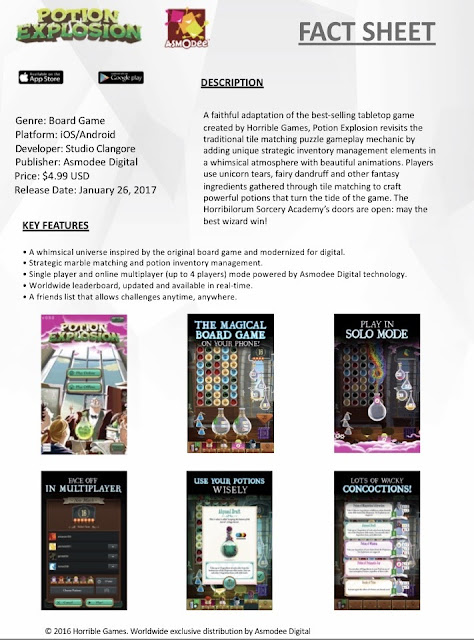 About Studio Clangore
Studio Clangore (www.studioclangore.com) is an independent developer based in Monza, Italy. Founded by the team behind the award-winning game “Magnifico - Da Vinci's Art of War", Studio Clangore consists of four industry veterans committed to the design of unique and exhilarating experiences, play after play.

About Horrible Games
Horrible Games is an Italian publisher of board games, known for the award-winning titles Dungeon Fighter, Steam Park, Co-Mix, Potion Explosion and Raise Your Goblet. Horrible Games has the will to bring players fun games that are also simple and frantic, providing originality and entertainment thanks to the mechanics of the gameplay. Their motto remains "Something horrible is on the way!”. CMON Limited is the publisher of the Potion Explosion board game in English speaking countries.
Posted by Lou at 5:03 PM No comments: 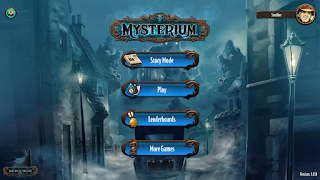 
I have always heard a lot about Mysterium the board game, and yet I never got a chance to ever play it...until now! So, this review is from a fresh and new perspective of the game via introduction through the app. The game reminds me a bit of Dixit or Codenames, where you are trying to get others to guess information one person has. You may or may not have good cards to work with, but it is up to the Ghost in this game to try and connect some random pictures with important clues such as who is the killer, where it happened, and with what. Classic murder mystery with a very interesting ambiance and story. I think the theme fits well into the game. The game itself is very fun. I like the artwork and challenge that the cards provide. It can be very frustrating to have a hand of cards as the Ghost and feel like nothing really fits, but there is some enjoyment in the challenge as well. 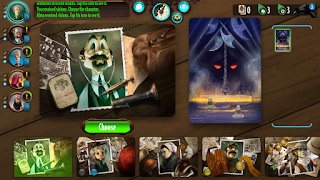 The app interface is pretty great! Everything is pretty intuitive and it makes for very quick games. The app features a magnifying glass that allows a closer look at the cards, vital for some "visions" to be understood. The games tutorial is well done, I don't see any real big issues. I haven't experienced any crashing of the app or anything, so it seems to be working well with no noticeable bugs I have encountered. The story mode provides a nice little storyline to go with some solo games. I was addicted to it and played probably 8 or 10 times one after the other. The AI is not perfect and can be frustrating, but let's be honest - there are some humans we play with that arnt much better. The goal is still the same, but not knowing all the ins and outs of the AI programming, I imagine they created a probability of one card being matched to another. It works. I am enjoying it anyway. 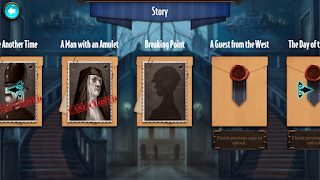 There are a few options for online play provided and I am so glad they included this option as the game shines with playing with other humans. I have tested out the play with my wife and it worked very well. It's nice that with this app you can get friends together and play even when you are scattered around geographically. I wish the online featured a password protected or private games. This would be a great addition. As far as I could tell, I had to create the game and then have others join quickly before someone else joined in. 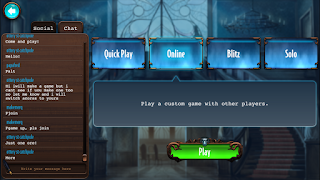 I really enjoy Mysterium as experienced from my iOS phone. I suspect it will only get better with time. The other thing I noted was a small number of people online using the app. I imagine this will grow with time and popularity. They also already have an expansion available with an in-app purchase. (I haven't bought the expansion yet, but it is only a matter of time I think.) Overall, the game is well done and I like the mechanics. The app is well made and provides a great experience to the game. After many many many plays, I could see some of the game feeling old as you see the same cards over and over again (thus the expansion would be nice), but for now, I will continue to enjoy Mysterium via my iOS app! If you like games like Codenames or Dixit, definitely try out Mysterium and if you like the board game version of Mysterium, I think you will enjoy the app - just get your friends and relatives on board as well and that is How Lou Sees It! 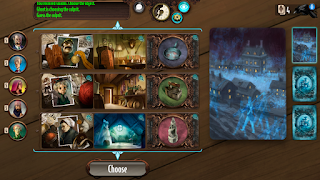 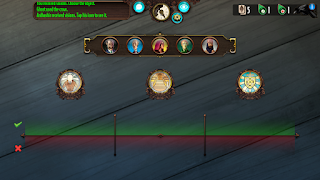 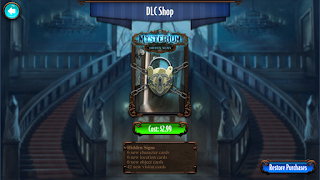