Movie Poll closed: No tea leaves necessary to predict that the most anticipated movie of the summer is HP7P2! Watch out Box Office, you may just see some record broken this summer. Thanks for voting! (Harry Potter and the Deathly Hallows Part II won with 9 votes, and Captain America had 2) 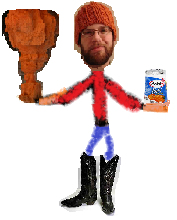 Another marvelous Marvel of a movie! A lot of my favorite movies of late include the many superhero movies that are coming out each year. Some of the comic book movies are duds (The Hulk), but most of them are very well done and very entertaining. Thor is very entertaining and it rightfully SMASHED the box office competition. Now maybe I really liked this movie just because of watching all of those Saturday morning cartoons, or because I collect comic books, but it may just be because it was a well put together movie. The movie had great visuals, music, and even a good story line. Natalie Portman and Chris Hemsworth are great as well as the rest of the cast (including Anthony Hopkins and Kate Dennings). Action, Romance, and Comedy like you can only find in the comic book/movie world. One to see and perhaps add to your collection.

Hammer Time
One thing relates the following: Bryce Canyon, M.C.H., a carpenter, Thor, and from Mario's world some of the Koopas....and that one thing is Hammers.

Hammers are totally old school cool. Invented way back by M.C. Hammer's great great great great....great grandma. She was tired of M.C. Sr. complaining about hard to open pistachios and she really wanted him to build her a house with something other than sticky paste. Anyway, any carpenter or real man would tell you just how handy a hammer is to have in one's tool belt. Batman wishes he had room to carry one on his belt too. 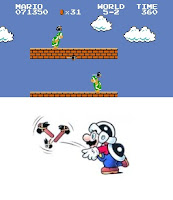 Hammers are not just useful tools for pounding in nails (or pulling them out) or for smashing open nut shells, but they are a deadly weapon. Now, I understand if you disagree with me at first, but you should talk to Thor, Mario, and Luigi before you state that disagreement. Thor's Hammer is a pretty awesome weapon. Its extremely heavy (making it impossible for anyone else to use it), indestructible, and magical.
Mario and Luigi fought Koopa Hammer Bros for years. No one likes having hammers thrown at them. Mario and Luigi got a little tired of their throwing flames and took up hammer throwing themselves there for a while. Back in Camelot time not only were swords popular, but a type of hammer called a mace became very popular. Once someone sees King Arthur whirling one of those around, then by Odin everyone wants one.

Suzanne Collins, the author who brought you The Hunger Games, wrote the Gregor the Overlander series first. Written as a kind of re-make of Alice in Wonderland, this book delivers like Karl Malone used to (I miss the Stockton and Malone days). Gregor follows his little sister, nicknamed "Boots" into a world underneath our own. Humans in the underland live among giant cockroaches, spiders, bats, and rats. What started out as an attempt to escape the world, ends in a quest that will change Gregor's life forever. I highly recomend this book and I look forward to the other 4 books in the series. My favorite yogurt is Yoplait's Light Fat Free Orange Creme yogurt. What's yours?
That is How Lou Sees It!
Posted by Lou at 3:57 PM 2 comments: