Well, by the looks of my Title Banner it would appear that some of you already know the great milestone that was reached late last night. "How Lou Sees It" has now surpassed 2,000 page views since its creation in January 2011 (First Post) and has been visited by users from over 10 different countries. With this great milestone, I decided to remodel my blog a bit (I hope you like it). And just as you would expect with these things, just after I put up a new Title Banner, someone goes and puts graffiti all over it. I must admit, I admire the person's spray painting skills, and the hamburger is quite clever - made me laugh anyway and it is the only reason that I am actually going to keep the graffiti banner up for a while (I will replace it come May, *see below for graffiti banner that was indeed removed 5/1/12). I am a big appreciator of art.

I would also like to take this time to inform my readers, like my friend the Uruguayan Lion, of an upcoming blog entitled "SPITWADS." This blog will have multiple contributors, including myself, and will cover a wide range of topics including sports, movies, and whatever else comes up. It will also feature Cornelius Fly. If you are not excited for this new blog, you should be. I'll let you know when it is officially up and running; you will not want to miss it. That is How Lou Sees It.

Choose One, It's Simple. 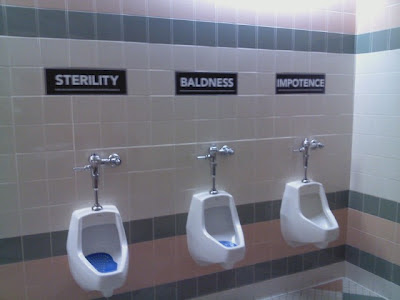 I really enjoyed this book. Grisham does really surprisingly well with his first "Junior Fiction." He establishes some great characters and introduces the reader (usually a younger crowed) to the courtroom and other law related issues such as animal court. Theo Boone's parents are both lawyers, his uncle is a lawyer, and his dog's name is Judge. Theo knows everyone down at the courthouse and has many kids from school who come to him for advice. When the biggest trial in town (a murder case) gets interesting - Theo is in the thick of it. Great read. Huge cliffhanger at the end though. I guess I will have to read the next one soon. And that is How Lou Sees It.

View all my reviews
Posted by Lou at 10:17 AM No comments:

With the huge success of The Hunger Games movie, movie makers are already trying to plan the next step to rake in the dough (looks like Peeta Mellark will have his work cut out for him at the bakery). Today was announced the beginnings of a huge movie project - The Hunger Games vs Twilight. Andy why not combine two huge money makers? Ever hear of Alien vs Predator? The details are very slim at the moment, but more is to come I'm sure. General plot line rumors say that the vampires from Twilight live into the Hunger Games time period and are in the hierarchy of The Capital and District 1 and 2. Scheduled to come out in 2015 (after all three Hunger Games movies have come out) many are already deliberating who will come out the victors. My bet is on The Hunger Games and that is just How Lou Sees It.
Posted by Lou at 9:36 AM 1 comment: