10. Games like Monopoly and Clue just don't do it for you any more.

8. You find yourself reading board game rules for fun that you don't even own.

7. You have no room for any clothes in your closet - its full of games.

6. Even though you don't know German, you know what Spiel des Jahres means.

3. You find yourself considering purchasing Starfarers of Catan for only $399.99!

2. You find yourself writing a list of the top ten signs that you may be addicted to board games.

and the number 1 sign that you may be addicted to board games....

1. You play a board game on your wedding night.

Board Game History
My friend Wikipedia suggests that board games pre-date literacy skill development! And who really needs to know how to read when you can have so much fun? Games have been found that are as old as 3500 BC.  Basically there are 3 great board game movements.

The 1st movement is what I call the Classic Game Movement. Classics such as Chess, Checkers, Go, Backgammon and a handful of others become the basis of our gaming as a society. These games were packed with strategic elements; to play successfully you needed to look at the entire board and pieces and not only decide what was best for the current turn but for future turns. You had to react to your opponent while progressing forward yourself to obtain the win.

The 2nd movement is what I call the Modern Game Movement. This movement started with Monopoly and Risk. These games looked at the world and created games that involved business and war along with other classics of a less serious nature; Sorry and Uno. Some of the games tried to connect a theme from the world or industry and others were very simple card games. You can definitely see some aspects of the Classic Game Movement in the Modern Game Movement, but most of the games (not all, but most) added more of a luck element to the games and the strategic planning and interaction was lost during this time.

The 3rd movement is what I call the German Game Movement. The Germans, with the help of some other Europeans, saved the board game basically. I'm not saying that Monopoly and Risk are not great games, the fact is, they are...but...it is the German games or (Euro games) that have truly found the greatest balance between the two movements. These games are based more on strategy than luck (but less strategic than Chess or Go), but some still have a lot of luck built into the game. These games are generally very interactive and most of them are different each time you play them. The Settlers of Catan first published in 1995 opened the US to the German board gaming world and the games have since continued to flood in with the great popularity of the Catan games.

The Gateway Game
The Settlers of Catan is THE gateway game for Americans into the German-style games. I don't recall how Settlers came to be in the good ol' US of A, but I remember my first time playing it. Revolutionary! The Modern Game Movement...move over! Settlers said to the world, move over...German-style games are here to stay and rule the board gaming world. Now, there are many other "gateway games," but Settlers definitely started it all. Other good "gateway games" are Carcassonne and Ticket to Ride.

Spiel des Jahres ("Game of the Year")
The Spiel des Jahres, or Game of the Year is pretty much the biggest award any board game (card games included) that a game can win. The game that wins this award basically will out sell any other game. If you want a good game, look at the list of all the previous winners bellow. You can also check out the nominees (also great games). There are also some other awards for complex games etc. given by the same people.

Lou's Games
Board games are fantastic, and I am addicted to them. It's not a bad addiction to have though. It provides great interactive entertainment while allowing you to use your noggin. Here are just a few of my games. You can't go wrong with any one of them. I may need to get a bigger game bag... 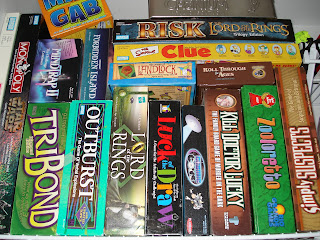 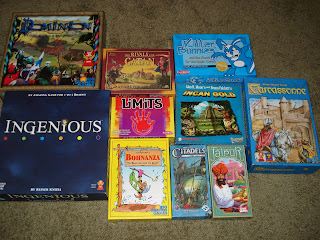 Lou's Big O' List
If you are interested in some great games, here is a not so little list of some of the greatest (in my opinion...in no particular order):

There is no end to the amazing games out there, and in my opinion...you can't have too many board games :) What is your favorite board game?