Pinata Offers a Plethora of Fun!

So, whenever I think about Pinatas, I of course think about colorful paper mache or cardboard animals full of candy and the famous scene from The Three Amigos, but now I will also think about the muy bueno game for 2 from Rio Grande Games.

As most of you who follow my blog know, I really like games that you can play with 2 players. If you are like me, there are a lot of times where you don't really want to invite a big group over, but you just want to play a nice game with your best friend. There are many games that scale well to 2 players, but there is just something about games that are purely made for it. Jaipur is one of my all time favorite 2 player dedicated games, but I'm so glad that Pinata provides just as much fun.

If you check out what is being said on boardgamegeek.com you will notice discussion between people regarding a different game called Balloon Cup by the same designer. I personally haven't played Balloon cup before, but the games are basically one in the same (in concept, with many slight differences between them including theme). From my understanding, it sounds like this re-implementation of the game is actually themed the way the designer originally had in mind; which takes me to my first point - the theme.

This game fits like a sombrero on a hot desert day. Perfect in my opinion. What is it about pinatas that make us so excited? Yes, being able to whack something really hard is definitely a big reason to like them, but it is usually the anticipation of the pinata breaking open, the pride in actually bursting it, and the excitement to see what was inside all this time and to gather as much of it for yourself as possible before that other kid who no one actually knows takes it all. In Pinata the cards, candies, and mats are just as colorful and playful as a real pinata. Players feel anticipation as new candies are revealed for the taking and the great satisfaction of winning a pile of candy. They also feel defeat when their opponent makes the winning strike and takes the very candy you would have given any number of pesos for because it would have fulfilled your lifetime dream of obtaining a gold medal in pinata-ing. 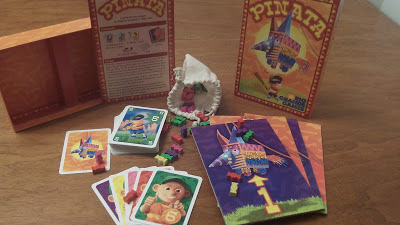 The components of the game are top notch (being from Rio Grande, not a surprise). In the game, you get 59 playing cards, 45 little wooden shaped candies, 4 playing mats, 1 drawstring bag, and rule booklet. Everything is well made and fit in the box very nicely. There have been some complaints with regards to the color choices made for the candies/cards. The pink and red candies for instance are sometimes difficult to differentiate (this usually is only a problem when playing in a lower lit area or when playing with someone who is partially color blind) and I personally would have much rather enjoyed having blue candies in lieu of the pink. That being said, the candies again are well made and are consistent in their given color. The rules are short and sweet, but do a good job in explaining the game. I did have to revisit them once or so during the first game since I wasn't at all familiar with the game previously. The rules also provide an alternative way to play the game, and it sounds like you can modify it even more too if you would like by trying to play without the wild cards. Great options. 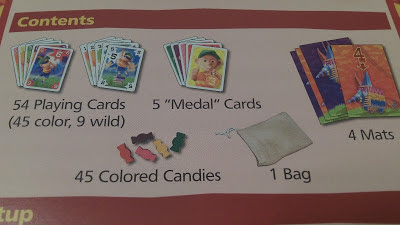 The game set up and game play are both really simple and before you know it you will be pulling in candy like it were Halloween night! There being 4 playing mats numbered 1 - 4 with a high side and a low side, these mats are randomly or chosen by players to be on one side or the other. Candies are then drawn from the drawstring bag to fill up the mats according to the number on the mat. Cards are shuffled and 8 are dealt to each player. The goal of the game is to be the first player to obtain 3 of the 5 medal cards. There is a medal card for each color of candy and they are obtained by being the first player to gain the number of candies on that medal card. Not all candies are created equal and some are a little more scarce than others. Since the candies are drawn randomly, players will need to evaluate which candies to go for first and which ones can they skip over for now. 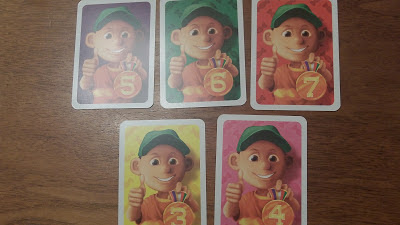 The cards consist of different numerical ranged cards in each color and some wild cards too. On their turn, a player places a card next to a mat and then draws a replacement card. To win the candies on the mat, one needs to either have the highest value or the lowest when compared to your opponent (again, the mat will show if the winner needs a high or low value). In the original game, you can only play cards on your side of the mat until your side is full, then you can play cards on your opponents side as well (the variant allows you to play cards on your opponents side anytime creating a more interactive game.). Each side of the mat must have a number of cards played equal to the number of candies, and the cards must match the color of the candies (example; 2 red candies and 1 green are on the "3" mat. Each side of the mat will have 2 cards in red and 1 in green, or 4 red cards and 2 green cards total. Or any number of wild cards acting for any desired color). Mats are "scored" when both sides match the number of cards needed. The winner gets all of the candies on that mat. The player would take any medal cards that he/she would be eligible for and the mat is then flipped to the other side and new candies drawn an placed on the mat. The medal cards can't be taken after obtained and the first to 3 wins. 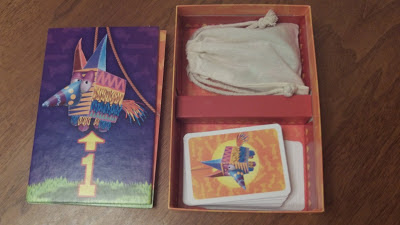 I really do love this game. The discussion above doesn't include all of the rules, but is there to give you a general idea of how the game flows and is played. It is really simple and can easily be learned by kids too. You have to choose if you want to keep a high card for later to secure candies on a high value mat, or if you will play it on your opponents side on a low value mat to throw them over so you can walk away with those candies. There is a lot of great decision making that takes place and yet the game is really light and provides a good amount of luck too to make it great for a simple children's game, to a lighter game for "gamers" to play while some one sets up the next game of Power Grid, Hawaii, or Agricola. Everything really meshes together well in this game. The game only takes 30 minutes to set up, play, and put away leaving your night or day open for another round of Pinata, or time for you to strap on a sombrero and host a Pinata tournament party. Up to you really. You can spend about 15 to 20 dollars on a real Pinata (by the way, I remember the first time I purchased a Pinata from the store and couldn't believe that it didn't come with candy already filled inside - yeah, you usually have to buy that separate and fill it yourself), or you could purchase this amazing game for the retail price of 30 dollars (usually around 24 on Amazon). Below is also a video review of the game to allow you to see the components.


Big SHOUT OUT to Rio Grande Games for making this review possible, and a big OLE to all of you! I say that the game Pinata offers a plethora of fun and that is just How Lou Sees It! 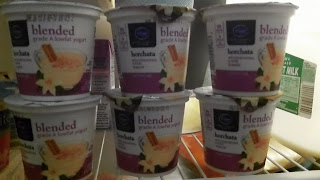 This post seemed like a prime opportunity to announce to you all that Yoplait's Light Fat Free Orange Creme yogurt is no longer my favorite yogurt. My new favorite yogurt is none other than Kroger brand's Blended Grade A Low Fat Horchata yogurt! Salud! 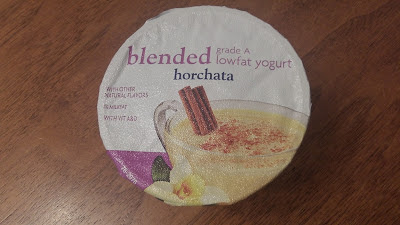 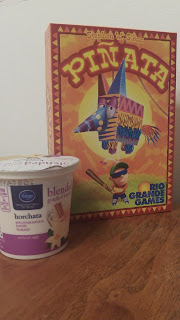 Everyone get excited for a plethora of new game reviews! Pinata, Cinque Terre, Star Wars: X-Wing Miniatures, Friday, Smash Up Expansion, and many more. Stay tuned!
Posted by Lou at 10:58 PM No comments: