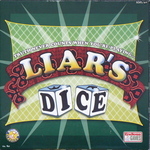 You lie. You win or you lose. A fun game that works for any number of individuals greater than two. You know Pirates of the Caribbean? Winning your father's freedom brought to you by Liar's Dice. Or rather winning the honor of being the BEST liar, something we should all strive for.

Everyone starts with a set number of dice, say six, then they roll them and keep them covered. Then you go around the circle with each person raising either the number of die of a certain number or the number on the die or both. (There are many variations on how to do this part.) What follows is a potential round...

Learning to lie never was quite so fun and That is How Lou Sees It.