Mastermind on a Ledge

Mordecai, I thank you. Wikipedia says that you were a postmaster. I have always wanted to be a postman and I believe you have inspired many to follow in your footsteps. I also have the desire to create some sort of board game. It's like we are very connected souls you and I. Tonight The Wife and I played your game Mastermind. Fantastic game.

About 8 days ago, The Wife and I played Three of a Crime which is a simplified version of Mastermind. In the game players take turns creating codes or breaking codes. The code is represented by using little colored pegs and once the code maker is ready, the other player (code breaker) guesses at the code. The code maker then gives the player some information on that guess (he will put out a red peg for each peg that is the correct color and in the correct location, and a white peg for each peg that is the right color, but that is in the incorrect location, and no peg if the color and location is wrong). This continues and players get points for how long it takes the other player to come up with their sequence of pegs. Great travel game for two players and another way to help children with deductive reasoning. I would suggest starting your young kids with Three of a Crime and then when they get the hang of that, upgrade them to Mastermind. Fantastic fun. Oh, and I won tonight creating a tie between The Wife and I! 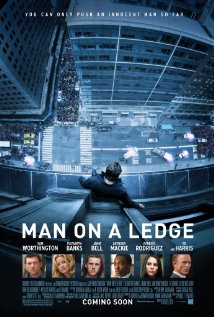 Man on a Ledge

This movie came out to theaters at the beginning of this year and I picked it up from the Redbox a few days ago. I was intrigued by the trailer and I actually enjoyed the movie. It was an entertaining film even though I thought some parts of the movie didn't have the greatest acting. The movie stars Sam Worthington and Elizabeth Banks. PG-13 rating due to language, violence, and an underwear scene. A fun idea for a movie, but I feel that it could have been better and that is How Lou Sees It.
Posted by Lou at 11:37 PM