Q and A with Carmarace Game Designer Luca Caltabiano

Luca Caltabiano founder of Board to Death TV and designer of the featured Kickstarter project Carmarace provides some As to my Qs.

I am very excited about today's post as you get to see the results from my very first interview (or Q and A) session. And since that interview was with someone as talented and well known as Luca, I feel very honored to have this opportunity. My purpose in interviewing Luca was to get some inside scoop on Luca and his new game Carmarace which is currently on Kickstarter. 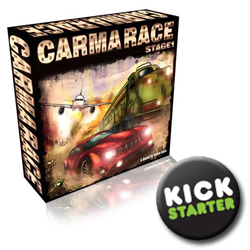 Kickstarter 101
For those who don't know, Kickstarter is a great website that allows people to gauge how well received some new product or project will be by asking the world to pledge a certain amount of money that will help them complete their project. Board games can be very expensive to publish (or so I have been told) and this is a way for people to say, "Hey! This game looks awesome...of course I will pay in advance for a copy so that the entire gaming population may partake in its perfect mayhemness!" If the project doesn't get funded (people don't pledge enough to meet the minimum goal) then no money is actually given and the project doesn't get too move forward. Frown Face. But, if the game does meet the minimum goal, all money will be taken from the people who pledged and this money will be used to produce the product. Stretch goals are usually then given to encourage continual growth of the pledged amount which usually enhances the quality of the game or adds really other cool rewards (I really hope Carmarace can meet 30k - foiled cards and box...sweet!). So, with that being said, check out my currently featured Kickstarter - Carmarace and enjoy my interview with its creator. 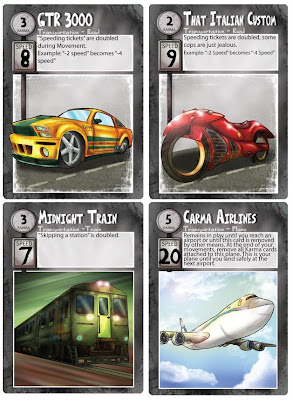 Q - As founder of Board to Death TV, can you briefly give us a little background about yourself and what inspired you to start making videos about board games in the first place?

Well I never intended on making video reviews, it happened by accident. I was a film student making short films for film festivals and then started a video production company. One night, during game night, I thought I would try out my new camera and film our game. I then posted that video online to show people the quality of the camera and other specs, but most people actually just commented on the Boardgame istself. They wanted more, and we got plenty of emails telling us to make reviews. So I emailed companies asking them to send us review copies to start off the website. Some companies jumped right in like Rio Grande, Gamewright, AEG, and others. Fantasy Flight however did not want to support us. But now that we have grown to what we are today, we do not send emails out anymore, luckily, the companies come to us. I saw how many people loved our videos, so I just continued doing them.

(I think I can speak for the gaming community when I say that we are all grateful that you have continued doing them and we are all excited for this new game of yours.) 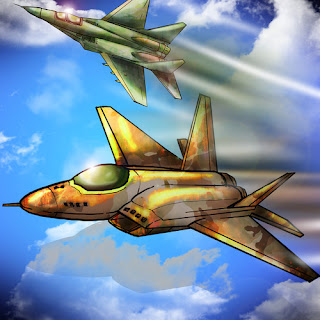 Q - What is your all time favorite board game?

Oh man...nice question. Um...I would have to say my First board game. Fireball Island. Why? Well, because it's the first game that always comes to mind when people ask me that question. If I would get that game for Christmas, I would probably cry a little. No other game would do that to me. It's probably the game I have played the most too. I must have played 'till it broke.

(Very cool! I have never actually heard of this game before, but after checking it out online - I can see why it would be a favorite. It looks like any of our readers could be the proud owner of a copy if you win the bid on e-bay for $150 plus. Check out info on Fireball Island at Board Game Geek.)

Q - Give us a little background on how you came up with the idea for Carmarace. What games would you say influenced your design of Carmarace the most?

Well, I love racing games and there isn't that many out there. I play lots of video games too and my favorite games are the Need For Speed ones. I wanted to make a simple card game at first, which anyone can play, even children. But then as we play tested, the guys said why not add abilities to some of the cards? And so, we did. Once we play tested that for a while, we thought, man, it would be cool to actually visualize the race. So, we made a board and play tested that until we knew we had a really fun game. 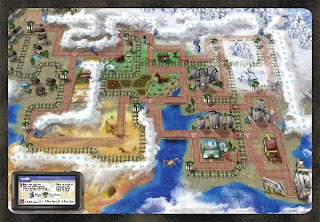 The Karma aspect of that game came to mind when I accidentally hit a cat with my car. I went back for it, he was still alive, so I picked him up and brought him to the side of the road and called the SPCA to pick him up. I waited 1 hour there with him, he was always starring at me, as if to thank me or something for not leaving him on the road. This was at 2 a.m. and I might have been seeing things, but he really looked like he was thanking me.

The next day, I went to pick up my fiance and in front of her house there is a bus stop. Someone had left their bag under the bus stop bench. I went to go check if it was school stuff or something I could return, but when I opened it, there was a camera in it. I brought it in and tried to see if there was any info or footage that I could use to bring it back to the owner but there was nothing. I told my fiance and she said it was Karma for what you did for the cat. I waited to see if anyone would come back for it, but saw no one.

(I know that I enjoy racing games. Mario Kart anyone? A friend of mine hit a dog once. He really just grazed it I guess, because it seemed to be just fine. There was a terrifying yelp though that caused us to look back and see the dog run off back into its yard. Karma. A nice theme for this sort of game. I hope if that person out there missing their camera is reading this that they will now know where their camera ended up. It is in good hands.) 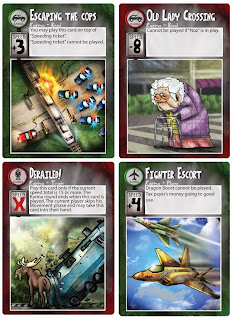 Q - When I learned about the game, I immediately thought of the card game Milles Bornes taken and made much more interesting! I loved playing that game growing up, and this game looks like a really fun improvement on that. Would you mind comparing the two games?

I have a confession to make, I never played that game. A lot of people told me about it and if I take a quick glance at the game, the artwork is very different and I think CarmaRace has more abilities and will be easier to Expand with new maps, new cars, and new mechanics. I will have to try that game one day.

(For those who don't know, Milles Bornes was a French card game where players are racing to travel 1000 km before anyone else. Playing speed limits, giving each other flat tires or stop signs, etc. This definitely takes that concept and improves upon it greatly - very excited!)

Q - Have you ever hitchhiked before?

No, but I have traveled a lot. I've been to Japan, Italy, France, South America, and more... I've taken all my experiences from those travels and incorporated them into this game. Actually, we have over 50 cards that are NOT in this game which are reserved for expansions. If my artists were required to make these cards too, we would have to wait longer for the game to come out. So we are launching with this and then expanding it with card packs.

(I haven't either. Heard some interesting stories though... One in particular, Hitchhiker's Guide to the Galaxy. Expansions, nice.)

Q - I love Kickstarter. The only thing I really struggle with is being patient for delivery of the game. This Kickstarter seems to have a pretty quick turnaround on the game relatively speaking and getting it just before Christmas is a brilliant idea. Where are you currently in the game making/publishing process?

The game is ready for print. The day we get the funds, we ship the artwork to china for print. Once printed, they will ship out to AMAZON and from there we will ship them to the backers and distributors. 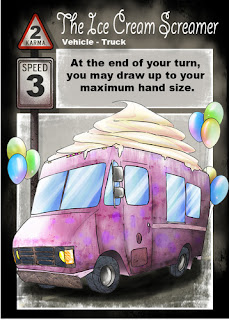 Q - I really like the artwork for the game. How did you decide to work with Squish Image?

She is a local artist who is exploding in popularity. She does all the conventions I can think of and mostly works with pins, prints, t-shirts, etc. When I approached with the game, she was on board and took a HUGE risk making all the art for it with no pay. She believes in it so much that she knows it will be a success and she will get something out of it for sure.

(That is really cool that you can incorporate a local artist in this process. Readers, you can check out here webpage here: Squish Image)

Q - If you had to describe yourself with one word, what word would that be?

Q - If you had to describe Carmarace with one word, what word would that be? 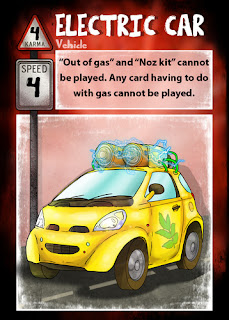 Q - Open mic! What would you like everyone to know about Carmarace and why they should click over to the project page and back it now?

As a reviewer, there are some things I've learned to love about games. Fun artwork (Dark Humour), great player interaction (You never WAIT for your turn), awesome bluffing mechanics and quick gameplay.
The strategy is there for hardcore gamers and the fun of gaming is there for the noobs as well. Not to mention that it's customizable and expandable. We play tested with a panel or reviewers, and the play tested with my little cousins, and then play tested with my fiance's girlfriends and they all had a blast and played more then once. I think you should back this game because it's something that you'll pull out more then once from the shelf. You'll WANT the expansions, you'll want the new maps, and you'll want to customize the decks to make you gaming group happy. It's just an awesome, growing, game that you don't want to miss out on.

(I can echo you on that. I think we are all excited about this project and will be ready for more expansions before you can say "Road Trip!")

A big thanks to Luca for taking the time to answer these questions. Check out the video trailer for the game below and check out the Kickstarter page for Carmarace to pledge now and secure your copy of this sure to be a "hit and run" game that you will be sure to enjoy and the game will sure to continue expanding and that is How Lou Sees It!

Email ThisBlogThis!Share to TwitterShare to FacebookShare to Pinterest
Labels: Board to Death TV, Carmarace, Interview, Kickstarter, Luca Caltabiano, Q and A, Reviews