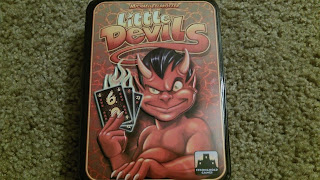 Personally, the theme of the cards being little devils isn't my favorite and I probably wouldn't have picked it up from the store because of the cartoon devil on the front (yeah, I judge things by their packaging or "cover"  occasionally). That being said, if you dismiss this game just for that, you will be missing out! I am a big fan of the game Slide 5 and I couldn't help but think of that game while playing this one. There is some good strategy that can help you out, but there is also a great luck element where you really aren't sure exactly what card your opponents are going to play. You will find yourself laying a card just hoping someone will play a card higher/lower than yours. A bit ironic that I am currently reading Dan Brown's new book "Inferno" as I am reviewing this game... 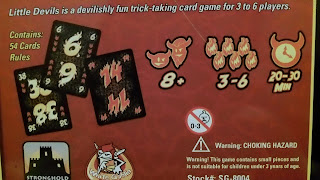 What's Inside The Tin
So, first of all, the game comes in a great portable tin. I am a big fan of the tin for its durability and visual appeal. All of the cards fit very nicely into the tin (I have some games that really don't fit everything well, and that is frustrating, but this one is great). You have 54 cards numbered 1 through 54 and the rules. The rules are very well explained and includes some example rounds which is nice.

Game Play
There is a little set up required for the game depending on the amount of players you are playing with. This can sometimes be a pain if you are constantly adding or dropping people, but it really isn't too bad. You just need to remove cards from the deck so that you have 9 cards for each player (no extras). So, for a 4 player game, you play with cards 1 through 36 removing cards 37 through 54 from play. I store my game this way since I will usually be playing with 4 people when I play.

The cards are then shuffled and dealt out. Play starts with the player to the left of the dealer and the role of dealer moves to the left after each round. That player picks a starting card and places it out in front of them. The player to the left then goes with play going clockwise. What makes this game so great is that the person leading or starting each hand AND the next player both make key decisions for that round. The second player then decides to play a card higher or lower than the starting card. If he plays a card higher than the first card, then all other players MUST play a card higher than the starting card as well. In this situation, the player with the highest card would take the trick. If a player can't play a higher card, they may then play any card, but they will be at risk for taking the trick. And if someone plays a card lower, then it becomes the player with the lowest card that gets the trick. May sound a bit confusing at first, but it really isn't it.

Likewise, if the second player plays a card lower than the first card, then all others must play a card lower as well if they can. If they don't have a lower card, they are forced to play a higher card with the highest card taking that trick. In Little Devils, each card either has 0 to 5 little devils on the card. These represent the point value of each card. Players are trying to avoid taking any points. Thus, avoiding taking any tricks or obtaining tricks with low points is your goal. Sometimes you will want to take a trick to get rid of a card from your deck, hoping to take low points now so that you can avoid larger point tricks later (lesser of two evils). The player who won the trick then starts with a new starting card. The starting card can't be a card with 5 little devils on it unless there is no other option. Game play continues until all 9 hands have been played, and then players add up their little devils adding it to their running total.

Game End and How I See It 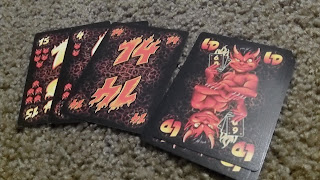 The game ends when someone gets 100+ points with the winner being the one with the least amount of points. Simple game, for simple fun. There is definitely a pretty hefty luck element to the game, but there is also some great strategy that can keep the devils away. My friends really enjoyed the game, as did I. There is actually more strategy to Little Devils than there is in Slide 5 (which is nice). I do however like the 2 to 10 player range that Slide 5 offers while Little Devils you are limited to 3 to 6. Both games are different enough as well to warrant getting both. Besides the ability to strategize a bit more in Little Devils, that second player deciding higher or lower each round is really what I enjoyed most about the game. I give the game 4 Fingers Up, or 9 out of 10 stars. The game retails for $15 dollars which is pretty average for a nice quality card game like this. A big SHOUT OUT to Stronghold Games for making this review possible! I look forward to reviewing many more Stronghold Games (in fact, keep your eye out for another Stronghold card game review in the coming days)!

Avoiding little devils has never been so much fun! That is How Lou Sees It!
Posted by Lou at 12:00 AM